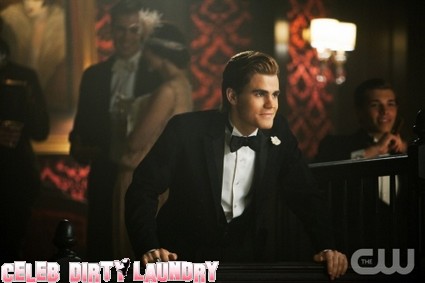 If you are a Vampire Diaries Fan then you have to watch this video preview of next week’s show called ‘The End Of The Affair’. On last night’s episode Klaus put his plan in action to create a hybrid army but things did not go exactly as he planned.  Elena was so determined to find Stefan she put Damon in danger. Tyler realizing that something is wrong with Caroline still being missing confronts his mother and a whole lot more.   If you missed last night’s show get our official recap HERE!

Official synopsis: THE ROARING TWENTIES – Klaus and Stefan arrive in Chicago, where Stefan is reunited with a vampire (guest star Claire Holt, “Pretty Little Liars”) who hasn’t really moved on from her interest in him decades earlier. In a flashback to Chicago in the 1920s, Stefan comes face-to-face with a shocking chapter from his wild past. After Damon gets a tip on Stefan and Klaus’ whereabouts from an unexpected source, he and Elena follow their trail. Back in Mystic Falls, Tyler is concerned about Caroline and turns to Sheriff Forbes (guest star Marguerite MacIntyre) for help. Chris Grismer directed the episode written by Caroline Dries.

The preview video opens with Stefan asking Klaus ‘What are we doing here’ to which Klaus responds: ‘Bringing back memories of the good old ripper days’. Yikes!  It seems like the guys are in Chicago in the 1920s and Stefan meets someone from his past. It also looks like Damon and Klaus meet and Damon says to him “What can I tell you, I am a thrill seeker”.  Klaus grabs Damon by the neck, poor Damon he always seems to be in some kind of trouble.  There is also a short scene with Caroline and her Dad who says he is going to fix her and then she screams so I don’t think Caroline is going to like his method of fixing her.  It seems a bit extreme.

“The End of the Affair” will air Thursday, September 29, 2011.   How are you liking The Vampire Diaries so far?  Check out the preview video below!  Tell us you thoughts, sound out in the comments below!