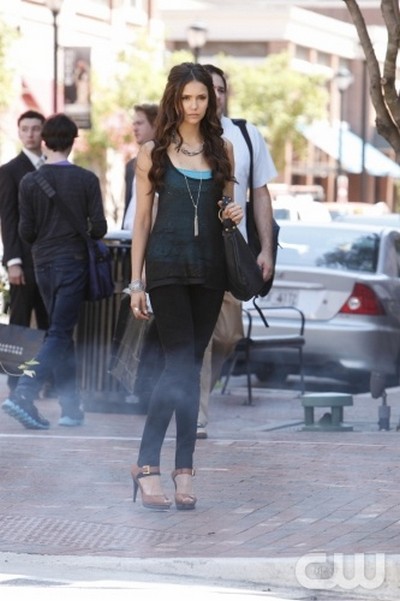 Tonight is the fourth episode of The Vampire Diaries.  The episode tonight is called “Disturbing Behavior”  Last week on the Vampire Diaries Klaus and Stefan arrived in Chicago, where Stefan is reunited with Klaus’ sister Rebecca.  In flashback’s  to Chicago in the 1920s, we come face-to-face with Stefan’s wild life as a ripper.  Elena and Damon follow Stefan’s trail to Chicago.  If you missed last week’s episode read our official recap here!

This week’s official recap:  The show opens and they are still in Chicago.  Klaus (Joseph Morgan) and Stefan (Paul Wesley) are shopping with Rebecca and Klaus is upset at her because she lost the necklace that he needs to find out why his hybrids are not working like he wants.

Katherine shows up outside the window and Stefan sees her and signals to him to come out.  Stefen tells Katherine (Nina Dobrev) that if Klaus finds out she is there he will kill her.  Katherine has figured out that Elena (Nina Dobrev) has the necklace that Klaus wants.  She tells Stefan not get too cocky because Klaus is smarter than he is.

Back over with Damon (Ian Somerhalder), Alaric and Elena and they are making chilli for the Founders party.   Over in Mystic Falls Jeremy is in bed and another one of his ghostly girlfriends, Anna is talking to him.

Caroline stops over at Elena’s house and so does Bonnie.   Everyone is glad to see her even Jeremy.  As he hugs Bonnie he sees Anna in the mirror.  Damon is with Caroline’s mother Liz and she wants Damon to compel Caroline’s father Bill.  Before he compels him he has to bite him to see if he has Vervain in his blood.  He determines he has and then compels him to forget everything or at least he thinks he does.

Over with Klaus and Stefan they are back with Gloria (guest star Charmin Lee), a witch Klaus knew long ago, Gloria takes Rebecca’s hand; she is going to look for the necklace.  All of a sudden Elena’s necklace burns her neck.  Bonnie takes the necklace and it gives her a shock.  Gloria’s spells reveal intriguing glimpses of the truth and Rebecca wants to know where the necklace is and what she saw.  Gloria tells them she needs more space and time and asks them to leave.

Over at the founder day Bonnie heads over to see Caroline and Elena and tell them she may have found a spell to help them.  All of a sudden Elena’s necklace starts rising and the girls ask what she is doing and Bonnie tells them that the necklace is doing it, it has magic.

Alaric tells Damon that whatever he is doing with Elena is a mistake and he should stop.  Liz comes and gets Damon and tells him the mayor just called a council meeting.

Back with Rebecca, Stefan and Klaus and they are feeding on people.  Rebecca is whining because Stefan is not paying enough attention to them.  Klaus tells her to give him a minute it has been 90 years LOL.

Over with Jeremy he walks in his house and Anna (ghostly girlfriend) is there.  She wants to know why Jeremy has not told Bonnie about her.  She warns Jeremy not to let Vicky in, she is evil.  She touches Jeremy and he cannot feel her.

Back with Gloria, Stefan shows up, she tells him she heard something interesting, when she saw the person with the necklace she heard them mention Stefan’s name.  She did not tell Klaus because she does not like him.  She wants the necklace for herself.  Stefan tries to attack her and she puts a spell on him that causes him a lot of pain.  She has put a paralysis spell on Stefan and sets him up on a table with candles all around and she is sticking things in Stefan to find out where the necklace is.  Stefan vows to not tell him anything.  She is draining the essence from Stefan to make a connection.

At the Council Meeting Liz is telling them there have been no instances since Spring all has been quiet.  The mayor ends the meeting.  Bill Caroline’s father comes in and asks Liz, the Mayor and Damon if they think the council are all stupid.

Bonnie is with Jeremy and they are trying to track down the necklace in the Grimoire.  Anna appears and she tells Jeremy the darkness is here and then the Grimoire start to burn and Bonnie puts the fire out.

Back over with Stefan, Gloria tells him she is impressed, she is torturing him still and he wont say anything.  Finally she sees Elena and she figures out she is the doppelgänger and still alive and that is the reason that Klaus cannot make hybrids.   Katherine comes in and stabs her.

Back in Mystic Falls Caroline she sees her Dad Bill talking to Damon, Liz and the Mayor.  It seems that Damon did not compel Bill after all and Bill wants to out Damon.  Damon is totally pissed that he has another enemy!

Katherine tells Stefan she has thought about his diabolical plan.  She tells him she has an idea instead of using Rebecca she should use Klaus.  She should befriend Klaus and ignore Rebecca.

Stefan tells Katherine that he use to know Klaus and Rebecca in the 20’s and they were running from someone and he wants to know who would make original vampires afraid.

Over with Caroline she is waiting for Tyler in his room and hiding out from her Dad.  They are making out and Elena calls and says it is an emergency.

Over with Bill, Damon walks in and sees Bill drinking and he tells him he is impressed that he could not compel him.  He tells Damon that he has strengthened his mind against being compelled.   Damon says I could kill you.  He tells Damon he knows he won’t kill the Mayor’s ex-husband.  Damon tells him he is another person who has underestimated him and bites him.  I bet this will have lasting consequences.   Damon lets Bill go and Bill asks if he is going to kill him and Damon says NO I am just taking pleasure in these moments.  Caroline walks in and throws Damon off Bill.  She cuts her wrist and offers her father blood and he says NO.  She grabs his head and tells him to grow up.  Damon comes back and they fight and Elena comes in and steps between them.  Damon tells her to stop trying to make him Stefan.

Over at Jeremy they are cleaning up the ashes from the fire.  Jeremy goes to the bathroom and Anna shows up.  Jeremy tells her to stop showing up when Bonnie is there.   He starts to shut her out and she disappears upset.   Jeremy decides to tell Bonnie what is up, he tells her he has told her lies.  He tells Bonnie something happened when she brought him back to life.

Back with Stefan Rebecca comes in and Stefan asks her who she was running from.    She tells him no one in the world is truly fearless but she cannot tell him who they were afraid off.  Rebecca tells Stefan that Klaus admires him because he sacrificed his life for his brother.  Rebecca grabs him and kisses him.  Klaus walks in and tells them Gloria as gone and they have to find a new witch.  Rebecca tells Klaus something is wrong, Stefan is no longer with them.  She tells Klaus Stefan was asking about Michael.

Damon is making two drinks and is waiting for Alaric to wake up.  He killed Alaric but he knew he would come back alive.

Caroline tells Elena she is not going to tell Elena she told her so but……  Elena agrees she was trying to change Damon.  Caroline says it is time to admit she is attracted to Damon and Elena says she cannot admit it because what would it say about her.

Caroline sees her father and goes over to him.   He tells Caroline he has to go home before someone kills him.  He thanks Caroline for coming to his rescue and says goodbye.  She tells him she is going to be okay.  He tells her she is a vampire and she will never be okay again.

Over with The Mayor, Liz and Alaric he is telling them he wants a voice on the council.  He tells them he will see them at the next meeting.

Over with Bonnie and Elena and she tells Bonnie that she feels weird without her necklace and Bonnie gives it back to her.  Bonnie asks Elena if she knows Jeremy has seen the ghosts of his dead girlfriends.  All of a sudden Elena is gone.

Damon opens the door and Katherine shows up.  She asks Damon if he wants to get out of Dodge.  He tells her she has good timing.  He replies: “why not the walls are starting to close in.”  He asks where they are going she won’t tell him.

Over with Klaus and he has Stefan in a closed truck.  Klaus wants to know what he has hidden from him, he opens the door of the truck and they are in Mystic Falls.

Yikes fantastic episode, I just realized the reason Elena got away so fast from Bonnie.  It was Katherine as Elena so that means Katherine now has the necklace!

What did you think of the episode?