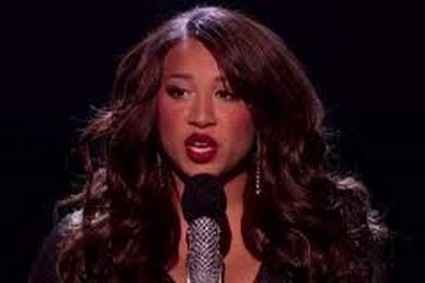 The X Factor USA’s fan favorite Melanie Amaro who is one of the remaining three contestants left in the competition is rumored to be caught in a love triangle.   An insider revealed that Melanie is crushing big time on Trace Kennedy, 24, of Stereo Hogzz.   Trace & Stereo Hogzz were voted off the competition before the final ten were announced in early November.   Marcus Canty, 20,  who was eliminated last week on The X Factor USA is said to be  jealous because he also has a thing for Melanie.

National Enquirer has more: “Melanie felt attracted to Trace at the same time she started to get close to Marcus.  Trace always liked Melanie and he wasn’t about to let her get away.  Meanwhile, Marcus who has a girlfriend back home, was torn because he was falling for her two!”

Melanie has denied the rumors saying, “The only romance I’m having right now is with my microphone. I have a very close friend, but it’s not like right now I’m doing anything to distract me, because I have to worry about this $5 million. Like I said, I’m so faithful to my microphone. I’ve been together with him for a very long time and I don’t think I’ll cheat. I love my microphone.”

Meanwhile many believe Melanie will win The X Factor USA competition after Melanie received words of support from her idol Mariah Carey.   Mariah tweeted to Melanie, “”Dear Melanie, you should be very proud of yourself and the beautiful gift you’ve been given. Thank you so much for your incredibly kind and humbling words. Never give up, never let go, no matter what. xo, MC.”

The X Factor USA’s finale is this week where the three remaining contestants: Melanie Amaro, Josh Krajcik and Chris Rene will battle it out for the $5-million prize.   Make sure to come back and visit us to see all the performance videos and a recap of the show. Who are you rooting for?  Sound out in the comments below!