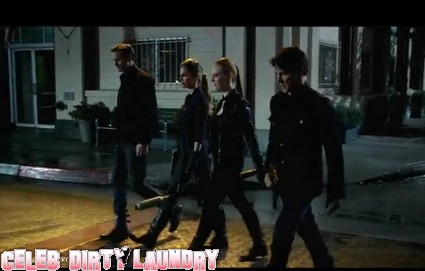 It’s that time again, get your fangs out, your glass of true blood and a comfy seat, cause tonight is another episode of True Blood.  The show is winding down with one more episode after tonight and the war between the witches and the vampires is about to explode. as the preview for this week says ‘If you want peace, you must prepare for war’.  On last week’s episode at the end of the show we saw Sookie trapped in the Moon Goddess Emporium with Marnie/Antonio.  Meanwhile Eric, Bill, Pam and Jessica are going to Moon Goodess Emporium to blow the place up and take out the witches and perhaps Sookie if they are not careful.   If you missed last week’s show catch our RECAP HERE!

Tonight’s show called ‘Soul of Fire’ opens with Jessica, Bill, Eric and Nan ready to blow up the place (Moon Goddess Emorium).  Marnie/Antonio thinks they are idiots that they think automatic weapons will do the job and blow up the place.  Marnie tells the other witches it is not a prison they may leave at any time and she throws a knife in a circle and tells them to use that to kill the vampires.  She is making fun of them.  One of the people Casey runs to leave and Marnie makes the knife lift off the floor and stab her.  Ughh someone needs to drop a house on Marnie!

Marnie just puked Antonia out, and Lafayette & Jesus are the only ones can see it.  Antonia is mad at Marnie because she has killed an innocent.  Antonia tells Marnie she is not who she thought she was.  Marnie is doing a binding spell and binding her.  Antonio is fighting it but Marne wins!

We are outside with the vampires about to blow up the Moon Goddess Emporium and Jason runs over and say they need to stop because Sookie is inside.  All the vampires start saying F**king Sookie and Jason tells them all off.

They abort and Jason tells them Marnie/Antonia put a spell on the whole place.  Jessica is mad at Jason, he tells her he is still upset about what they did.

Over with Sam he is ready to avenge Tommy’s life he is trying to find out where Marcus is.  Luna comes in (Marcus’ ex wife and Sam’s new girl) and she is pissed Marcus took/kidnapped their daughter.

Marcus is over with Debbie and he is trying to convince her to go away with him.  Marcus’ daughter wants to talk to her mother.  Marcus tells Debbie they make sense together and he will get her off the ‘V’.   Marcus tell her that Alcide won’t give her what she needs love and tells her she can be a Mom to his daughter Emma.  She tells him she cannot because she loves Alcide.  Yikes she has been sleeping with Marcus ughh maybe they can kill her off.

Back at the Moon Goddess Emporium Casey, girl that was stabbed has a pulse says Jesus and he wants to try to save her.  Jesus and Lafayette take her to the bathroom  and Lafayette is trying to revive her and finds out Casey is dead.  Jesus took Lafayette into the bathroom to tell him he needs to make Antonia come out of Marnie’s body or she will kill them all.

Sookie tries to reason with Marnie tell her she understands sometimes she feels misunderstood.  She tells her they are all on her side.  She begs Marnie to end it because she has all the power.

Over to Andy in the middle of the woods complaining about Terry leaving him there.  He is a hoot he is talking to himself and fighting with himself.  He sees a light in the woods and a fairy materializes (Mirella) and sends a bold of lightening at him and he goes flying.

Emma, Luna’s daughter calls Luna, Emma does not know where she is.  Alcide looks at the cell phone and sees it is his home phone number.

The vampires are outside the Moon Goddess Emporium and Bill scream for Marnie to come out and not hide behind magic.  Sookie comes out and tells Bill, Marnie wants to negotiate.

She tells Marnie the protection spell on the Moon Goddess Emporium is un-penetrable for vampires.  Bill says that she has to let Sookie go.  Marnie says if Bill and Eric kill themselves she will will let Sookie go.  Bill agrees to her terms.  Bill is going to shoot Eric and then Pam will shoot Bill.

Pam screams ‘The True Death to Save Bo-Beep, I don’t think so’ she runs over, gets the rocket launcher, and shoots at the Emporium.

Alcide, Sam and Luna get to Alcide’s house and they find Emma.  Emma tells them Marcus is upstairs, Alcide and Sam run up.    Marcus and Sam are getting into it.

Back at the Emporium Marnie is telling the witches how horrible the vampires are because they would not deal.  What a monster she is ughh.  Jesus is going to casts a spell to attempt to unbind Marnie from Antonia (the spirit possessing her).   He is telling Lafayette he is going to release a bad part of himself and not to be mad at him.

Back at the vampires, Eric is fuming at Pam and she tells him she will not allow him to go to the true death.  Jessica is with Bill and then she turns around and sees Jason all burnt up and she runs over to him.  She bites her wrist and tells him to drink her blood.

Over at Alcide’s Sam and Marcus are beating the crap out of each other with lots of insults going on.  Debby is freaking out she does not want Sam to hurt Marcus.  Sam stops and lets him live.  Sam turns his back and Marcus goes for a gun and shoots.  Alcide jumps on him and breaks his neck.  Debbie asks him what he has done?  He turns around and tells Debby he abjures her, and tells her he is no longer with her, he will share flesh with her no longer.  She is weeping and he walks out.

Back at the Moon Goddess Emporium Marnie is trying to see what is going on outside with a spell.  She then asks to see the future and she sees herself dead.  She tells the witches the vampires are planning to kill them all and asks them to form a circle.  No one wants to do it.  Marnie tells them the vampires have no regard for their life.  She convinces them.  Meanwhile in the bathroom Jesus is cutting himself and getting ready to perform the spell.  I see a death in Jesus’ future to bad I like his character but I don’t think he will be able to stop Marnie.

Outside Jessica has helped Jason.  Jason thanks her.  All of a sudden the vampires have become robots under the spell of Marnie and  Jessica, Bill, Pam, Eric, are all moving towards the protection spell (sun) that will kill them.  Sookie realizes what is happening and with her fairy powers does something and the spell is broken and the vampires stop going to the protection force.

Marnie is going nuts she tells Sookie that she has betrayed her.  She puts a ring of fire around Sookie and the girls are freaking out.  Meanwhile back in the bathroom something is happening to Jesus.  Lafayette tells him he has to speed up Sookie is about to burn up.

Jesus is starting and Marnie and Antonia are starting to separate.  Jesus turns into a demon.   Antonio flows out of Marnie’s body and the fire around Sookie goes away.  The force field goes down and the vampires run in.  Bill with his gun wants to shoot everyone, Sookie tells them not to do anything to the other Marnie was holding them.

Bill says just Marnie and one male witch jumps in front of her to protect her and Eric runs up and pulls out the dudes heart and then drinks the blood from it.  Bill them proceeds to shoot Marnie many times.

Andy walks into Arlene‘s house and Arlene tells him Terry is looking for him.  She notices something is wrong with Andy.  Andy says something strange happened to him in the forest and it might have been the drugs but he does not know.  He tells her a women jumped out of a ball of light and she was so beautiful and they made love and he was good at it.  He tells her after they finished she went back into the golden light ball.   Arlene thinks he is crazy from the ‘V’ she thinks it poisoned his mind.   She tells him what is real is that waitress Holly think he is something.  Andy tells her she is right.  She is going to call Terry and tell him Andy is safe.

Back at the Moon Goddess Emporium Marnie is dead and they have glamored the people they have had too.  Jesus is upset but Lafayette assures him he did what he had to do.  Jason is sitting down and Jessica comes to see him to find out if he is okay.  He thanks Jessica again.  Jason tells her he is going to lose his best friend, even without her blood in him she is all he thinks about.  He asks her what he is going to do.  She tells him she wishes she knew.

Oh no, as they nestle down to sleep Marnie appears above Lafayette in bed and takes over Lafayette’s body….. yikes the war is not over yet, Marnie is back.

What did you think of the episode?  Sound out in the comments below!