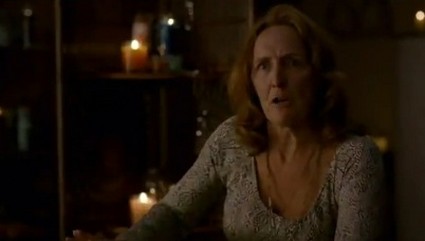 True Blood airs tonight on HBO and believe me it is a great time to be a True Blood fan :-).   I am dying to find out what happens to Jessica, please, please don’t kill her off :-)  Episode 8 of True Blood is called Spellbound and it is suppose to pick up right where the last one left off.

Just to remind you on last week’s episode Antonia tasks Tara to assemble a circle in order to cast a spell to destroy Bon Temps’ vampires.   The spell Marnie/Antonia put is drawing all of the silvered vampires to struggle to get up and meet the sun. Jessica breaks free from her chains and pulls on the silver bars. She calls the guard and knocks him out and takes his key to unlock the cell. Jason is running to make sure she’s okay. He gets stopped by Bill’s guards and she opens the door to meet the sun.  If you missed last week’s show catch .

This week’s show starts with Jessica opening the door to meet the sun.  Jessica is burning and you see Jason (our hero) jump through the door and on top of her and he saves her YAY!  Her fangs come out and she gets on Jason and is about to hit him.  She clearly wants to do bad things to him :-)  Thank God Jessica comes out of it and tells Jason he almost saved her life.  She apologizes to him and then she starts to kiss him.  Bill is screaming for Jessica and crying.

Jason carries Jessica in to see Bill.  Poor Jessica her face is all burned and she is crying because she killed Bucky.  Bill tells Jessica to get back into the sell because Marnie has only temporarily dropped the spell to fool them.  He tells Jessica to get back into the cell until nighttime.  Poor Jason has to put Jessica in silver.  He is trying to take Jessica’s mind off the silver.  He is so cute – I wanna take him home with me.   I see a love triangle here :-)

Bill says he has underestimated Marnie.  He tells Jason that they are indebted to him.  Jason sees the body on the floor and Bill tells him that he cannot afford to have it reported.

We are over with the werewolves: Marcus (the leader of Alcide and Debbie’s new pack) wants nothing to do with the vampire-witch war and makes that clear to his followers.

Over at Sookie’s he wants her to take the silver off but she is frightened because she says it will pull some of him off.  He reassures her and tell her that the silver on hurts more than taking it off.  Eric assures him that he will heal quick.   oops he lied he is not healing and Sookie says you have to feed.  She offers him to feed on her.  She tells him she is trusting him but he has to promise not to go overboard.  He tells her to hold the silver and if he does anything to silver her.  Eric promises he will never betray her.  When Eric is finished he bites his own hand and offers it to her she says “I am not injured’ he tells her ‘they will be one!’

Meanwhile over at Hoyt‘s, Jessica comes back and tells Hoyt she wants to move out.  Hoyt says he cannot live without her.  She tells him she has a hunger and being with him is not enough and she does not want to hurt him.  He does not believe her and then he breaks down and starts crying.  He blocks the door and won’t let her go he tells her he cannot live without him.  Jessica take Hoyt by the head and slams it into the wall and scream ‘then die!’   LOL oops not true it was a dream, did not happen :-) oh well..

Eric and Sookie are still having their  sex marathon and now that she has drank Eric’s blood we are led to believe the sex is even better.    So we get to see Sookie naked, bare breast and all and of course Eric’s bare butt.   The powers that be over at True Blood are sure milking the Eric and Sookie thing for everything it is worth.   Eric and Sookie are in a large bed and the snow is falling and a white fur rug is covering them.  They are the happy little couple loving each other.

Over at Moon Goddess Emporium When the dust settles Marnie/Antonia is totally pissed that only one vampire died.   She wants to snuff the vampires out for good.  Tara is agreeing with her she wants to see the vampires gone as well.  The phone rings and it is Bill he wants to talk to Antonia.  In an effort to resolve the situation, Bill asks Marnie/Antonia to a meeting.  They will meet at the cemetery in Bon Temps at midnight.

Back at a gathering with the werewolves Debbie is telling Alcide how happy she is because they are with the pack.  Marcus tells Alcide he is happy to see him.  Alcide tells Marcus he supports what he aid about staying out of vampire business.

Over at Merlotte’s Arlene is screaming at Terry because he left the demon child (Mikey) in a playpen behind him and he was not watching him.  While they are arguing the creepy ghost women comes in and sings to the baby and Lafayette sees her.

Jessica finally comes home to Hoyt and I don’t think it is a dream this time.  Hoyt asks her what is wrong and she tells him she really loves him but she thinks the made a mistake moving in together.  She feels they moved to fast and believes they should spend sometime apart.  She tells him she is a vampire and she thinks maybe she should not be in a magnanimous relationship.  He gets really upset and tells her he deserves someone better someone who can have children and someone who will not be a virgin her whole life.  Jessica start crying and he tells her to get out and he rescinds his invitation to her and tells her maybe god does hate fangs, cause he does.   Does not work out quite how she dreamt.

Back over to Eric and Sookie and of course they are still naked and now in her bed.  Sookie is telling Eric that they have an obligation to fight with King Bill.  She tells him she will not leave Bill to die.  Eric tells Sookie he wants to be with her forever and she tells him ‘there is no such thing as forever.’

Over at Lafayette’s he is dreaming and he sees creepy ghost lady and he recently discovered powers allows him to tap into her past.   We learn a bit more about why she’s targeting the baby in particular.  It seems she was having an affair with a white married man and she got pregnant and he took the baby because it was a mixed baby.   Creepy ghost pops into room where Lafayette is and she possesses him.  So Lafayette is now him.

Eric and Sookie take a break from their marathon sex long enough to tell Bill they’re prepared to fight with him.   Eric tells Bill that Sookie has a warrior’s heart and she is prepared to fight for Bill.   Sookie tells Bill she can help, she has powers.  Bill tells her she could dies and she tells him if she can save people she loves she is willing.

Pack leader Marcus  is very eager to get into a war with Sam over Luna and his daughter.  He shows up at Luna’s house and wants to tuck his daughter in and finds Sam there.   Looks like Sam will have a powerful enemy.  Marcus tells him he pissed on the wrong boots and leaves.

Jessica heads over to Jason’s house and tells Jason she broke up with Hoyt.  Jason is upset because Hoyt has been his friend since the first grade.  He rescinds his invitation to Jessica and out she flies.  Poor Jessica she is not having a very good night :-)

Over with Lafayette who is now possessed by creepy ghost he is at Andy’s house he walks in Andy is sleeping and he steals his gun.  Next he is over at Arlene’s house and he steals Mikey and the doll.

When the two factions – witches and vampires, with a few human commandos thrown in – finally meet in the graveyard, the situation escalates and both Eric and Sookie are targeted.

She starts to chant a spell and Sookie hears it and tells and tells Bill all of a sudden other humans appear to help Bill.  Antonio starts chanting a spell and the fog comes.   A battle ensues!  Pam catches Tara and is about to kill her when Bill comes and tells Pam he commands her not to touch Tara now and forever.

Back over to Sookie, someone ise trying to stake her and she screams at them she is not a vampire.  A light comes out of her hand and the person goes flying.  All of a sudden someone shoots a gun at Sookie and she is bleeding and falls to the ground.  Sookie is bleeding someone come and picks her up and it is Alcide.  Meanwhile we see a white wolf and then it transforms into Debbie.   I think Alcide is in big trouble.

Eric confronts Marnie fangs bared.  Antonio/Marnie is not afraid  and she puts a spell on him, he falls to his knees and is looking very confused.  The screen fills with smoke and the show is over.

What a fantastic show so much action!   I cannot wait till next week.  What are your thoughts on tonight’s show?  Let us know in the comments below!  Stay tuned for next week!