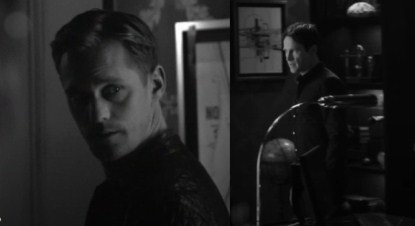 Waiting definitely sucks but we have another promo – Tonight HBO aired a new promo for  True Blood and this one is called “Waiting Sucks: Bill.”   In this promo we see Bill Compton (Stephen Moyer) and Eric Northman (Alexander Skarsgård)  speaking in the interior of a study at night – Bill and Eric take stock of the situation.  Both of them understanding it clearly.

Bill says, “There’s a new coven in town.  They can control the dead and they can control us.”  Eric says “I can remember the inquisition, I was around then, you were not”

We know Season 4 will be the season of the witches.   I wonder what all this means for the residents of Bon Temps?  Are you excited for the show to start? Tell us what you think of all the promos.  I am excited for it to start – I have a feeling Season  four is going to be great!