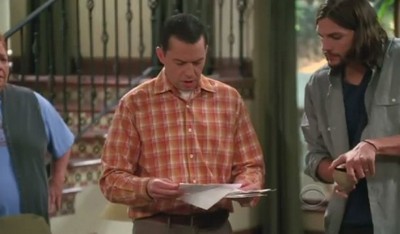 Two and A Half Men returns tonight with it’s ninth episode and it is called ‘Frodo’s Headshot.’  Stay tuned as our sister site Fit Fab Celeb covers the official recap of show with up-to-the-minute details.   Much to my surprise, although people are complaining about the show and are disappointed that Charlie Sheen is no longer part of it, it has actually grown in interest and the ratings are good.  It looks highly likely that it will be back for a tenth season with Ashton Kutcher.  Are you surprised?

On Last week’s “Two and a Half Men” had Alan having somewhat of a nervous breakdown, he thought he was his dead brother Charlie as he has not really dealt with the death of his brother and Walden had him admitted into a mental facility. Did you see last week’s show? If not, you can read the official recap here!

In tonight’s episode, former “Celebrity Apprentice” star, Gary Busey, portrays Alan’s roommate at a mental institution where Walden checked him into following his breakdown.  Busey guest stars as himself and Alan is met with a slew of challenges that test his ability to cope just when he is about to be released from the hospital.  There is a sneak peek video & synopsis here for your enjoyment.