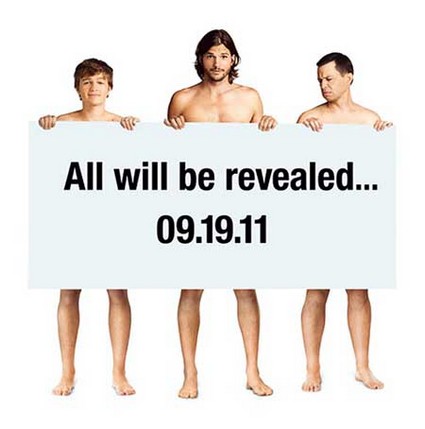 It’s been a long seven months since Charlie Sheen was fired from the starring role as Charlie Harper on Two and a Half Men and tonight, the show is back minus Sheen. In the hopes of making us not miss the super talented Sheen, creator Chuck Lorre is throwing Ashton Kutcher at us. Will fans still be watching, or will they tune in else where?  Stay tuned tonight for the full recap and you be the judge if this new Two and a Half Men is worth the watch!

Here’s a review of our favorite stars and their characters; Jon Cryer as Alan Harper, Angus T. Jones as Jake Harper, Conchata Ferrell as Berta the housekeeper, Holland Taylor as Evelyn Harper and the newest addition, Ashton Kutcher as Walden Schmidt who plays a recently divorced internet tycoon.

The season opener begins with Alan speaking at Charlie’s funeral, or he tries to but all of Charlie’s ex’s keep interrupting him with various comments about Charlie’s sex life and his selfish personality.  Rose (Charlie’s stalker) was the last person to be with him when he died in Paris and she explains that he died by falling on a metro platform and slipping in front of a train, but he didn’t suffer, his body just exploded like a balloon full of meat! There’s a creditor at the memorial service that claims Charlie owed him $35,000.00 for pharmaceutical supplies and his mother shares with everyone how sad she is, but happy at all that she is inherting.

Alan and Evelyn are discussing selling Charlie’s place and Alan doesn’t want to sell it but he can’t afford to pay the upkeep. His mother offers for him to move in with her.  His mother hosts an open house to sell Charlie’s love nest and various guest stars show up.

Dealing a low blow, the doorbell rings and Alan receives a box by courier, it is Charlie’s ashes from the crematory. Alan sits down for a heartfelt chat with his deceased brother’s ashes – it only lasts 1 minute, then he tries to decide what he is going to do with his ashes although apparently Charlie wanted them swallowed by Pamela Anderson.

Alan stands up with urn, opened, to go to the beach to spread his ashed and when he turns around, newbe Walden Sschmidt arrives at the door, startles him and Charlie’s ashes go up in the air and all over the carpet. (this pissed me off, Lorre has taken enough hits at Charlie – this was overkill)

Alan takes it upon himself to console Walden and during their getting to know each other, Walden reveals that he is worth billions. Walden apologies for making Alan spill Charlie and Alan says don’t worry about, he’ll dust buster him later.

Alan offers to dry Walden’s clothes, he strips down to his birthday suit and hands over all his clothes then Alan whispers “Wow, he’s hung like an elephant!”.

Later in a bar, Alan and Walden spend a little time getting to know each other and Alan tells him that he can’t get the image of his penis out of his mind. Both share breakup stories then try to hook up with some women and Walden’s opening line is “My wife dumped me and I just want to die”. Alan is flabbergasted that it worked and tries the same thing. Later, they both bring the women back to Charlie’s place. While Alan is in the kitchen preparing the drinks, the two women are upstairs having a three some with Walden.

The next morning Walden wakes up and comes down stairs nude in front of Berta and Alan, he announces that he loves the house and is going to buy it.  Jake walks in with his mom and both get to see Walden naked. It was all about Walden’s manhood tonight – without it, there would have been no show.

To sum up the first episode without Charlie Harper, it completely SUCKED!