US Magazine: Kim Kardashian Almost Called Off Her Wedding (Photo) 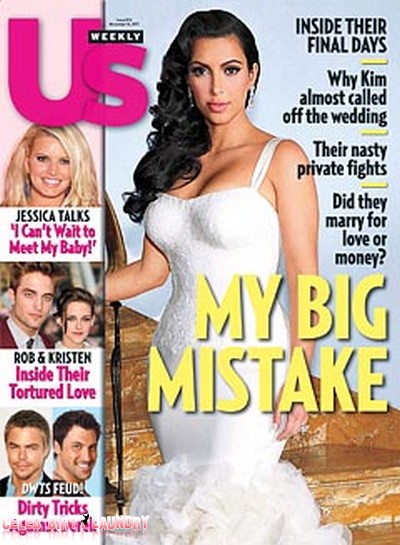 The November 7th, 2011 issue of Us Magazine features the cover story ‘Kim Kardashian – My Big Mistake.‘   Us Weekly is claiming that Kim Kardashian had grave doubts about marrying Kris Humphries and was worried that her marriage might fail even before the wedding!  So now it’s not about explaining the divorce anymore – instead we are reading that the marriage itself was a big blunder. Can this be true?  Us has lots more to say and its pretty convincing.

Pals tell the new Us Weekly, out now, that Kardashian saw red flags before that big, hugely publicized day. “She knew it was wrong before they were even married,” a Kardashian insider says. “They were not seeing eye to eye and it felt wrong.”

Indeed, as she and her family were putting the finishing touches on the wedding, “she was calling friends, telling them she didn’t want to do it,” the source reveals to Us.

In the end, however, with so many expectations riding on the nuptials, “she felt like she couldn’t turn back,” another pal says.  “She got in over her head. She made a big mistake and she knows it.”

Kardashian admitted as much in an emotional blog post Tuesday — her first since Monday’s shocking divorcing filing.

“I felt like I was on a fast roller coaster and couldn’t get off when now I know I probably should have,” she wrote. “I got caught up with the hoopla and the filming of the TV show that when I probably should have ended my relationship, I didn’t know how to and didn’t want to disappoint a lot of people.”

This sounds believable to me – although everyone has some doubts before they marry – what do think?