Us Magazine: Kim Kardashian & Kris Humphries Are Not Getting Along (Photo) 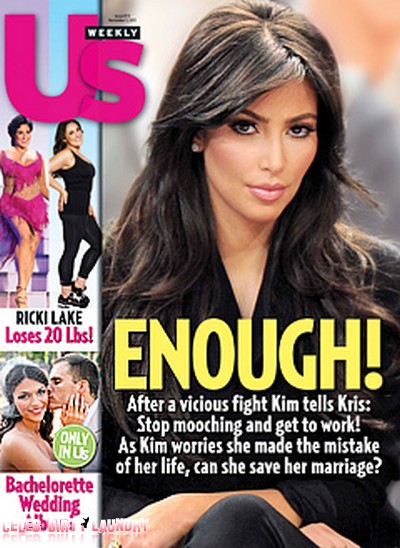 A confidential and secure source has revealed to US Weekly that Kim Kardashian and her Husband Kris Humphries “are not getting along at all” and it’s because Kris just won’t fall into line with Kim’s tyrannical authoritarian demands! According to the inside source “Kris is not drinking the Kardashian Kool-Aid, and it’s causing major problems.” Imagine that poor Kris, a champion NBA athlete, is now ruled by his wife as she attempts to remove all of his rights and freedoms. Kim lays down the law and Kris must follow his new dictator in lockstep along the path to Kardashian Kountry.

Only two months after their ostentatious $10 million wedding the 31-year-old Kim spends all of her time on reality shows and multiple moneymaking schemes while 26-year-old Kris remains on an extended unemployment streak thanks to the NBA lockout.

Now Kim is demanding that Kris stop loafing around and get serious about making money – which is all that any Kardashian truly cares about. Sources say Kim is already near her breaking point and a family friend reveals that the couple had a huge fight just days before her birthday on October 21: “They had it a out! She told him he needs to do something productive… He needs to get off his ass, like, yesterday.”

This fits right in with what we all saw on DWTS Monday when the newlyweds sat in the audience but showed none of the affection one would expect from ‘just marrieds.’

“On some levels,” says the friend, “she feels like she made a mistake.”