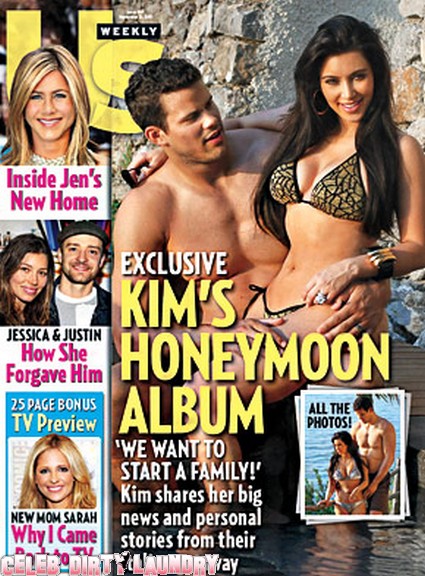 The September 12th issue of US Weekly features Kim Karadshian and Kris Humphrie’s sexy honeymoon and they have exclusive pictures and details from the honeymoon.  Kim and Kris spent their honeymoon on Italy’s Amalfi Coast last week.  The honeymoon was suppose to be super private but of course not so private that Kim could not let some pictures be taken.  After all this is all about the money right?

US Weekly has the scoop: After tying the knot in Montecito, Calif. Aug. 20, the reality starlet, 30, and NBA star, 26, mostly kept to themselves at a $3,300-per-night Romeo and Juliet chalet at the five-star Hotel Santa Caterina — emerging for al fresco meals and PDA-packed time by the pool and in the Mediterranean Sea.  It was an unexpected nuptial vacation for Kardashian, who showed off her world-famous (just-married!) bikini bod alongside her hunky shirtless man in exclusive pics in the new issue.

Kim claims the honeymoon was a surprise.  They were suppose to wait until next year, but Kris surprised her at the last minute.  hmmm last minute yet they were able to sell the pics… ya right.   Kim also let slip to the magazine she wants to start a family ASAP.   Someone else for Kim to pimp out for $$$$

If you need to see these pics and I can’t see why you would, pick up a copy of the magazine which hits stands today!