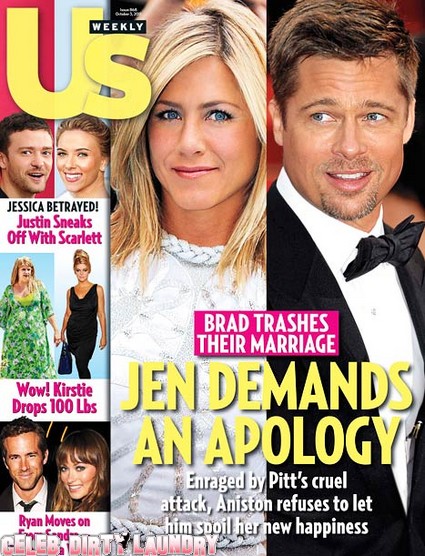 The October 3rd, 2011 issue of US Weekly features the cover story “Team Aniston Went Ballistic After Brad Pitt Comments”.  Not a very original story OK!  Magazine picked up the same storyline this week.  This is all because Brad , 47, gave an interview to Parade Magazine last week and in the interview he dropped the bombshell “I think that my marriage [to actress Jennifer Aniston] had something to do with it. Trying to pretend the marriage was something that it wasn’t.“

The next day he issued a statement to clarify his comments on his ex-wife, just in case they were misinterpreted.  US Weekly claims Jennifer Aniston, 42,  was enraged by Brad’s cruel attack and demanded an apology.

The magazine has more: “Team Aniston — her agent and publicists — “went ballistic,” a Pitt insider reveals, and angrily reached out to Pitt’s camp.   They got his team involved and Brad was read the riot act — the only way you can read the riot act to Brad Pitt,” the source says.

Within 24 hours, Pitt had surprisingly released a statement lamenting that his words were misinterpreted, and that his former love “is an incredibly giving, loving and hilarious woman.”

Of course the magazine has put it all together and claims that the reason Brad did this is because he is gasp…..jealous of Jennifer’s romance with her new fling Justin Theroux.   I have to get one of those sources that keeps leaking information to them!   Do you buy this crap or is it more groundless speculation on the part of the magazine?  Sound out in the comments below!

For more on what the magazine claims is their new war pick up the current issue of US Weekly.