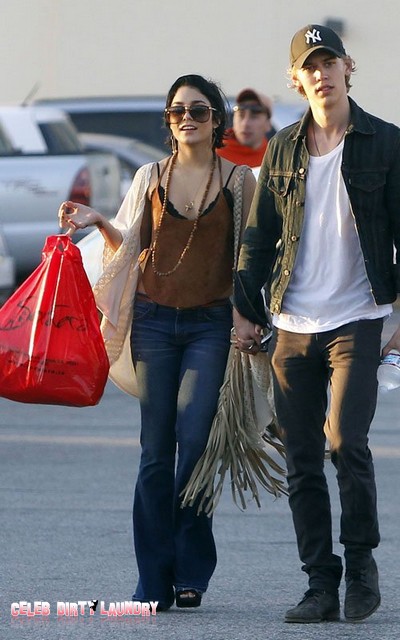 By all appearances it seems as though Vanessa Hudgens has found love again. The 22 year old put rumors to rest that she was getting back together with her ex, Zac Efron, by stepping out this weekend with new Boyfriend Austin Butler.

Not only were they spotted hugging and kissing during a Venice Beach stroll this weekend, Vanessa just couldn’t seem to get enough of him. Even when he stopped to dispense cash out from an ATM, Vanessa had her arms tightly wrapped around him. I can’t really blame her – the 20 year old is pretty gorgeous. If you like, you know.. 20 year olds.

They grabbed lunch at 26 Beach Restaurant and spent the afternoon biking around. How adorable. Next up for Vanessa is “Journey 2: The Mysterious Island” which hits theaters in February and is directed by Brad Peyton. Vanessa seems to take her roles seriously – going as far as chopping off her locks and putting on the pounds for her characters, so it’ll be interesting to see her acting chops in more serious rolls.