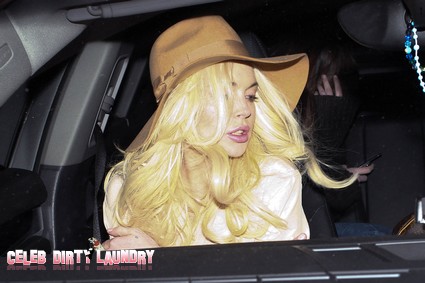 Lindsay Lohan left her purse with $10,000 in a car and went into a house party while on her Hawaiian vacation. The purse was stolen and then returned hours later – minus the cash – which Lindsay claims was $10,000. Who carries $10,000 in cash – what is wrong with credit cards or traveller’s check?

Could it be that the money was for drugs? It is tricky to pay for illegal drugs by check or credit card (unless you are Charlie Sheen, of course) so we want to know why Lindsay was carrying that much cash.

TMZ scooped the news:  Lindsay Lohan’s purse has made it back to its rightful owner safe and sound — passport and everything — but sources tell TMZ, the thief kept one massive jackpot … $10,000 in cash.

Lindsay’s $5,000 Chanel purse was stolen last night from a Hawaii house party — and inside the bag … her passport, important probation docs, and a boatload of cash.

Sources tell us, Lindsay stayed long after police left — driving the entire party into a frenzy for hours looking for the purse — and up until this morning, she had come up empty.

But that’s when one of her friend’s eyed a suspicious-looking local, and asked if he knew where the bag was. We’re told the local denied everything, but showed up with the bag minutes later … claiming he found it on the street somewhere.

We’re told Lindsay was so ecstatic to have the bag back, she didn’t bother asking questions — despite the missing $10,000.

Was Lindsay planning on doing something that one can only do with cash? If so, what could it be? Tell us in the comments below.  Traveler’s checks, people.