BY Robyn Good on September 20, 2011 | Comments: 5 comments
Related : Dancing With the stars, Dancing With The Stars Season 13, Reality TV 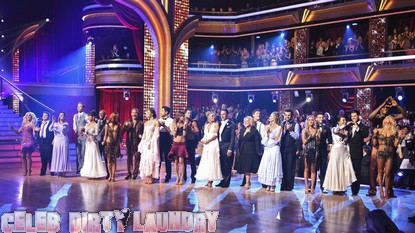 Tonight we will find out who will be the first couple kicked off Dancing with The Stars Season 13.  Last night the contestants took to the dance floor to show us what they had and some showed us what they did not have.

The results show is kicking off with the professional dancers doing a number to a cover of Lady Gaga’s song, The Edge Of Glory. Maks is looking hot! Yum!

Stay tuned as we recap the rest of the show!

Earlier tonight, Harry Connick, Jr. performed. Now, LMFAO has taken the stage to sing Party Rock Anthem. The pros are shaking their goodies for the camera. Have I mentioned how hot Maks is yet? Just checkin’.

Next up for the results show are J.R. Martinez, Chynna Phillips and Chaz Bono. The next couple safe are Chynna and Tony. J.R. and Karina are also safe, leaving Chaz and Lacey ALSO SAFE!

Up next for the elimination, we’ve learned that the next safe couple are David and Kym. Nancy and Tristan are still in jeopardy. Carson and Anna are safe.

The next safe couple is Rob and Cheryl. So who got eliminated on tonight’s episode? METTA WORLD PEACE AND PETA MURGATROYD! Are you surprised? Let us know your thoughts on tonight’s elimination in the comments below!