Why The Bachelorette Ali Fedotowsky Broke Up With Roberto Martinez (Photo) 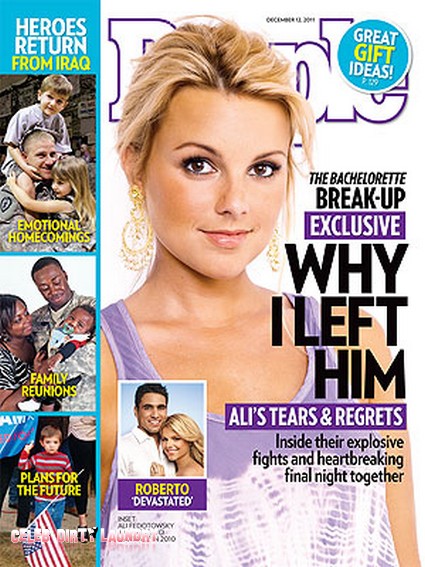 The current issue of People Magazine features the cover story ‘The Bachelorette Breakup – Why I Left Him.’  The magazine has all the details of why The Bachelorette Ali Fedotowsky broke up with fiancé Roberto Martinez.   After 18 months the pair are done and now Ali is dishing all the details of went went wrong.  The two had explosive fights and Roberto is devastated after their final knight together.

People has more: “I wouldn’t be being truthful if I said this came out of nowhere,” a tearful Fedotowsky, 27 said.  “We definitely had been having problems. But I had always believed that we could work it out. We both realized we were unhappy more than we were happy,” says Ali. “And we both deserved more”

It was evident something was wrong last year when they delayed their wedding plans twice.  Ali had previously said that she was ready to marry right away.  What do you think can these television showmances work?

Also included in this week’s issue the magazine has info on heroes coming home from Iraq.  They have the emotional homecomings, emotional reunion and their plans for the future.   To read all this and more  pick up the current issue of People Magazine on stands Friday.