16 and Pregnant Nikkole Paulun Gets Engaged And Arrested On Her 18th Birthday! 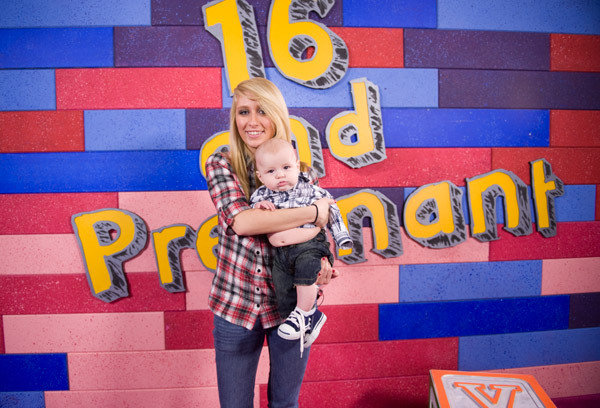 For many young mothers on the hit MTV show 16 and Pregnant, their 42-minute episode about an unplanned pregnancy will be their most shining success. Not so for birthday girl Nikkole Paulun, a cheerleader who got knocked up by her addict boyfriend Josh Drummonds. Their episode showed an unhealthy relationship and Nikkole preparing to raise her son as a single mother. However, Josh has since gotten clean and the pair are back together.

In traditional MTV fashion, the pair are speeding right through their adolescent years, and this past Saturday night, Nikkole and friends partied in “a penthouse suite in Ohio” (FAH-NCY!). No big deal, right? Not for Nikkole. She tweeted a picture of her hand—with a ring on it. The caption was “Ahhhhhhhh!!!!!!” Call me hasty, but I think that someone just got engaged. Unfortunately, Nikkole’s bliss was shortlived, because that same night she tweeted, “this is not happening. I am not getting arrested . . .”

What is this?  Talk about a super sweet birthday. No word yet on the cause of the arrest—her twitter followers asked what was going on, but my guess is that their party got busted! Girl is only 18, but that doesn’t stop most people from drinking underage. Combine that with disturbing other hotel guests and you’ve pretty much guaranteed yourself a ride in the back of a police car. Later, she tweeted “goodbye life” which definitely didn’t dispel rumors that Nikkole is going to be facing some legal battles ahead.

We hope that she doesn’t follow in the footsteps of other 16 & Pregnant alumni Amber Portwood, Jenelle Evans, and Farrah Abrams, who have struggled with various combinations substance abuse, child neglect, physical abuse, and custody rights! I’d like to think that with a new birthday will come a new attitude, but chances are that this won’t be the start to her happily ever after.