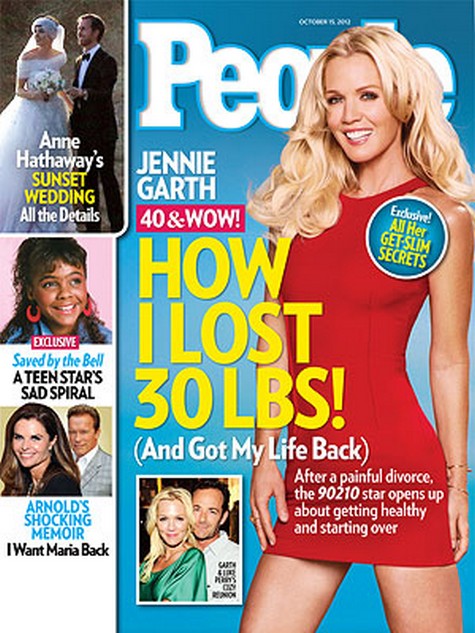 The current issue of People Magazine features the cover story “Jennie Garth – How I Got My Life Back.”  After a painful divorce Jennie Garth dishes to People this week how she got healthy and is starting over at 40-years-old.  In March this year Twilight’s Peter Facinelli and Beverly Hills 90210 alum, Jennie announced their split after 11 years of marriage.  The two have three children together: daughters Luca, 14, Lola, 9, and Fiona, 5.  Not only did the divorce happen for Jennie this year but she hit the milestone, her 40th birthday and decided to revamp her life.

People has the exclusive story this week, “[2012] has been a bit of a rebirth for me as a person by shedding that negative space and all the pain associated with that time.”   In addition to moving on with her life as a mom to the three daughters she has with Facinelli, Garth began to focus once again on her career, including the popular Old Navy television commercial that reunited her with former 90210 costars Luke Perry and Jason Priestley.   Garth, decided to “focus on taking better care of myself,” she says, by shedding what she calls “30 lbs. of dead weight.”

At the time of the divorce there were rumors that Peter had cheated on Jennie with a 20-something woman he met while filming Breaking Dawn: Part Two in Vancouver.  Jennie denied the rumors saying they were hurtful.    Jennie and Peter claimed the reason for their divorce is they grew apart.  Whatever the reason for the divorce Jennie says the weight loss has made her shed the negative forces that once weighed her down.   Jennie goes on to say it is a great time in her life now and she is happy and thankful to be alive.

To find out more about how Jennie lost the weight and got her life back on track, pick up the current issue of People Magazine, on stands Friday.