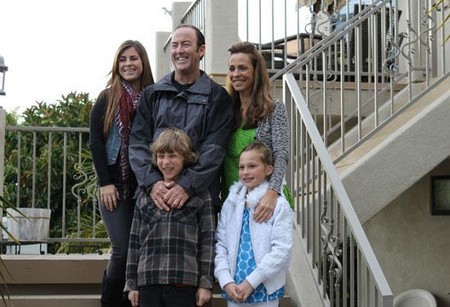 Tonight on LIFETIME is an all new episode of 7 Days of Sex. On tonight’s show we meet the Mish/Davis family. After 7 days you won’t believe what this couples discover about themselves underneath the sheets. When the going gets tough, could your marriage survive…7 Days of Sex?

On last week’s show Newlyweds Bobby and Erica were looking to get their sex life back on track if she can let go of her love for the finer things and he can learn to put her before his busy work schedule.

Eric Pincus wished his wife spent more time in the bedroom and less attention on their children while wife Dorothy would be more turned-on if he would just turn on the romance.

On tonight’s show Ex-firefighter Mike and his wife Victoria attempt reclaim their sex life and learn how to spend time together now that he’s retired and spending every day at home. Dean Davis wants his wife Tanya to initiate more bedroom time, while she struggles to boost her diminished libido.

Stay tuned for our live coverage of the show tonight at 10PM EST! Meanwhile, while you wait hit the comments and let us know what you think of Season 1 of “7 Days of Sex” so far!

RECAP: Victoria and Mike have been married 22 years and are headed for a split.  Dean and Tanya have been married for five years and the sex is over.  Both couples agree to have sex for seven days in a row, then either stick together or pull the plug.

Dean and Tanya Davis are a really fun couple.  Their interactions are really fun and it’s hard to believe that they will split.  I suspect they will work their way through the problem.  They rarely see each other and Tanya has no libido.

Mike Mish is a retired firefighter and he and Victoria fight a lot.  He withdraws and she yells.  That is the main way that they interact.  He wants to move toCosta Ricaand she thinks it will completely kill their marriage.  They don’t work well together and freely admit it.

On day one at the Mish’s Mike is hanging out with the guys.  He fills them in on this 7 day challenge and they are amused.  Dean and Tanya start day one by discussing how to make the most of their mission.  He helps her knock out her to-do list so that she can focus on him and he leaves a rose on her pillow.  After their encounter she admits she had a hard time shutting her brain off.

The Mish’s aren’t doing so well.  They are still battling over the Costa Rica idea.  Mike doesn’t want to hear her opinion.  In his head, he makes all the decisions which is extremely disrespectful to his wife.  She storms out and I suspect this experiment will be tough.  Maybe I’m wrong, once they get started they both let go of the hostility.

On day two the couples are trying to go from no chance, to romance.  The Mish’s are trying to figure out how to not sweat the small stuff. Victoriasays in 22 years they’ve never spent more than a few days together.  This time they have sex at the beach.

Dean decides to make Tanya a serious dinner filled with aphrodisiacs’ such as oysters.  He also prepared a tray of fruit and chocolate covered strawberries.  The result?  Tanya felt fireworks and like they were on a first date.

On day three Mike has a plan to get Victoria to chill out.  He wants her to make a list of things that they would enjoy in Costa Rica.  She mentions ziplining, rafting and the flowers.  Mike hates opening up but is beginning to realize that it’s necessary if the marriage will be saved.  By their third encounter in as many days the mood is getting lighter.

Tanya decided to sex things up by sending a picture to Dean of her in her sexy boots.   Poor Dean is in an acting class and can’t focus.  He leaves to get home to his naked wife.

Mike isn’t the most creative person but he set up a mini spa for his wife.  He gave her a foot message and pedicure.  The problem is EVERY conversation that these two have is aboutCosta Rica.  On day four Dean is worrying because Tanya hasn’t had an orgasm so they are going to talk to a sex therapist.  She’s really frusterated and ready to just pull the plug on everything.  The sex therapist makes house calls and Dean talks about his lousy stamina and Tanya’s never being into it.  Tanya complains about the lack of foreplay.  The therapist makes them both understand that these blips make them very normal.  Dean actually sets a timer to monitor how long he kisses his wife!  This time Tanya says the sex was awesome.

Victoria decided to surprise Mike with breakfast in bed on day five.  Dean and Tanya try couples yoga and then take a hot shower together.

On Day six Mike takes Victoria out on a fishing boat.  As expected,Victoriabrings upCosta ricayet again.  I’m thinking if she just spent this time focusing on THEM, she and Mike would be much happier.  When they communicate you see life signs in their marriage.

Tanya is surprising Mike by having sex in the car.  They are in a parking garage trying to feel as spontaneous and free as they did years ago.

It’s an interesting concept- how sex really either makes or breaks a relationship.  These two couples couldn’t possibly be more different but this experiment did pull them together. Is it enough to make them recommit?  Well on day seven both couples renew their vows. Victoria is moved and crying because she realizes how vital this has been for them.  Part of their vows is her promise to keep him on his toes.  He never did a proper, bended-knee proposal so Mike now gives his wife that.

The Davis’ have learned how simple it is to do little things for each other.  In their vows the include things they will do to change and spice things up.  In the end both couples are very grateful and believe this experiment saved their marriage.  Tune in next week for another new episode.