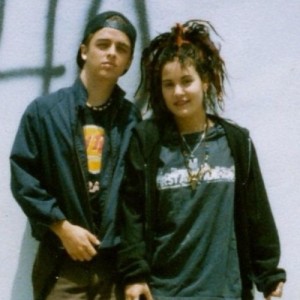 Meet Adrienne Nesser, Billie Joe Armstrong’s wife. Didn’t know he was married? Neither did I. Ever since Armstrong had that interview with The Advocate back in 1995, I always just assumed he was playing on both sides of the fence. But nope, apparently he IS in a monogamous marriage with Miss Nesser, whom he met back in 1990 at a Green Day performance in Minneapolis, Minnesota.

To refresh your memory, Armstrong was quoted as telling The Advocate, “I think I’ve always been bisexual. I mean, it’s something that I’ve always been interested in. I think people are born bisexual, and it’s just that our parents and society kind of veer us off into this feeling of ‘Oh, I can’t.’ They say it’s taboo. It’s ingrained in our heads that it’s bad, when it’s not bad at all. It’s a very beautiful thing.”

And then later just a few years ago back in April 2010, Billie Joe told Out magazine, “There were a lot of people who didn’t accept it, who were homophobic. The fact that it’s an issue is kind of phobic within itself. At some point, you gotta think, this should be something that’s just accepted. I don’t really classify myself as anything. And when it comes to sex, there are parts of me that are very shy and conservative. I want to respect my wife.”

Well this wife of his has been by his side for years and now after this iHeartRadio festival rant and now rehab stint, she seems to be supporting her man through that as well.

Via her Twitter, Adrienne tweeted, “Sometimes we just need a moment to reset ourselves… Thanks for all the love & support #gdfamily”

And sometimes that is SO true! Here’s hoping that Billie Joe Armstrong’s wife Adrienne Nesser is able to stay strong for her man and their two children Joseph and Jakob.