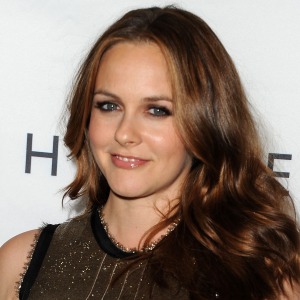 What’s new with Alicia Silverstone? Panties! Lingerie! Bras! Oh my! That’s right, the Clueless actress stripped down to her skivvies for a racy new photo shoot for Bullet magazine and I’m not going to lie, the new mama looks hot. Seriously. She just gave birth to her baby Bear Blu in May last year and now she’s already stripping down (almost) naked!

In the photo shoot, Silverstone playfully flips her hair to one side while posing seductively in high-waist briefs and stockings. Alicia poses in another photo clasping her hands around her waist, drawing attention to her breasts. Though she didn’t stop there! The baby mama of rocker Christopher Jarecki lifted up her little black dress exposing her behind!

Not as interesting, Silverstone spoke to the magazine in an interview about her time in the height of her career. She explained, “I remember doing interviews in London for some movie at the time, and the interviewers would want to talk about the movie, of course, but all I wanted to talk about was murder. They probably expected me to be like the Clueless character, but instead I was sitting there saying stuff like, “And then they anally electrocute!” I pretty much bummed everyone out.”

One very interesting part of the interview was when Clueless director Amy Hecklerling spoke. Get this, she compared Silverstone to that of Marilyn Monroe! You know Lindsay Lohan is suddenly jealous after hearing this!

Heckerling said, “When I was writing the script for Clueless, I had a vague notion in my head of Cher as a pretty, sweet blonde, who, in spite of being the American ideal, people still really like. You had that Marilyn Monroe thing, which is that other women love you, too.”

I’m not so sure about the Marilyn Monroe comparison, but I will admit that yes, Alicia Silverstone in lingerie is something to be a tad envious of.