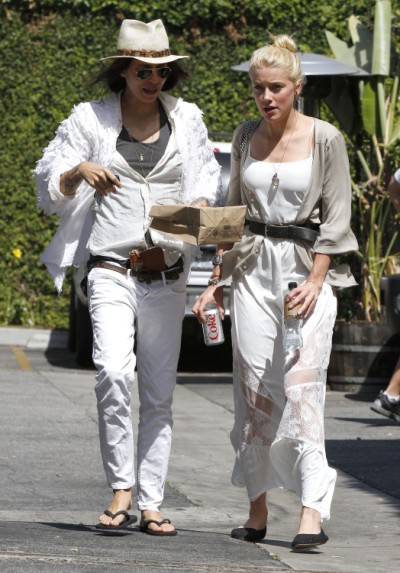 It turns out there’s at least one person who isn’t hurt and betrayed by Johnny Depp and Amber Heard’s clandestine relationship. It’s not Vanessa Paradis – she still wants to cut Amber’s heart out with a spoon since she’s the primary reason Paradis and Depp split after fourteen years. Oddly enough it’s Amber’s ex-girlfriend, Tasya van Ree, who is speaking out and giving her doppelganger the thumbs up sign.

Now magazine reports Tasya went out to lunch with Amber two weeks ago and gave her the OK to date the actor. Tasya  told friends, “I give them my blessing.”

That’s awfully nice of her, but come on, did she have a choice? I guess she did. She could have chosen to go the angry route a la Paradis, but instead she chose to accept the fact that her hot girlfriend is leaving her for the biggest movie star in the world. I’d say she made the better decision. And she really has no hard feelings. Just yesterday the couple of two years was spotted grabbing lunch in West Hollywood.

Check out the photos below of Tasya and Amber. Did you have to do a double take when you saw them? Did you think they were Johnny and Amber? I did too! Johnny and Tasya certainly have a similar bohemian aesthetic complete with the floppy hat, open shirt and hanging necklaces. I doubt Johnny could rock the flip flops though. He’s more a boot guy.

What do you think of Tasya’s benediction? The artist seems like a pretty cool person actually. Not only is she stepping aside but she’s also sticking around as a friend to Amber. It can’t be easily being known around Hollywood as Johnny Depp’s other woman – especially when Paradis lives there now and has lots of famous fashion friends. Can you imagine those two running in together? LA’s a big place but it’s not that big. It’s bound to happen sooner or later. For Amber’s sake, I hope it’s much later!