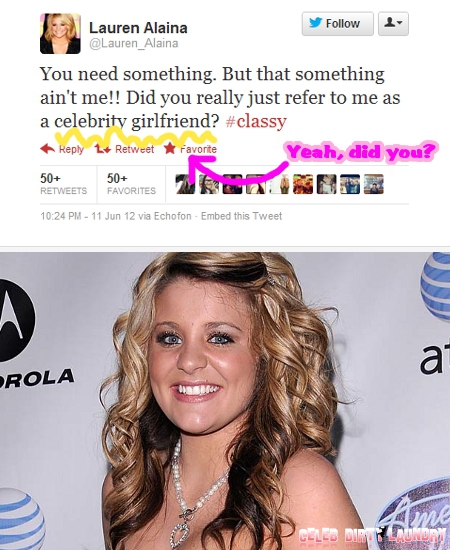 Lauren Alaina has had quite the bumpy ride on Twitter recently . . . after lashing out at her ex, she officially apologized. What’s up with all this country cray-cray? CDL went to find out.

The drama involved Lauran Alaina hitting out at a cheating ex boyfriend and his new girlfriend. From several of the tweets which involved her ex, this one came out on the top of the bitches-be-cray-cray pile, “You need something. But that something ain’t me!! Did you really just refer to me as a celebrity girlfriend? #classy!” Alaina’s dirty laundry washing did not stop there, as she fired several shots at his new girl, “Ps: you won’t ever have to worry about him cheating on you with me I wouldn’t do that to someone. That must [be] the kinda girl you are. #eww”

Lauren Alaina’s fans responded with much fervor and after a huge Twitter breakdown, Alaina eventually apologized and said that she’s not a good role model to her teenage fans. Alaina wrote after the nuclear-ex-BF fallout, “I want to personally apologize for the way I handled the immature situation last night. I don’t usually let people get to me, but now I know that getting your heart broken makes you react in strange ways” We agree Lauren, after our break-ups we usually end up in a random bar on the outskirts of a town resembling a zombie apocalypse, crying in our shots of Tequila.

She continued on in her mad ramblings, “I want to apologize to all of the parents on my twitter whose children I’m Setting an example for. It won’t happen again. I am truly sorry if I disappointed anyone. I’m embarrassed to have let it get so out of hand. It wasn’t worth it and it shouldn’t have ever happened. I also want to apologize to the people I was arguing with. U said some pretty awful Stuff about me, but I only made it worse by responding. I can promise you that next time I’ll ignore you. As an ending note, I hope everyone Knows [that] was out of character for me and I won’t do it again. Thank u for all of the support [you’ve] shown me over the last year. Love y’all.”

Yes, Lauren, we also end up with weird capital letters and strange grammar in our posts online when we break up with our exes.

In other news, Lauren is doing well on the country charts and, uhm, that’s about it?

Would you have done the same if you were Lauren Alaina? Have you done this before? Let us know in the comments below.