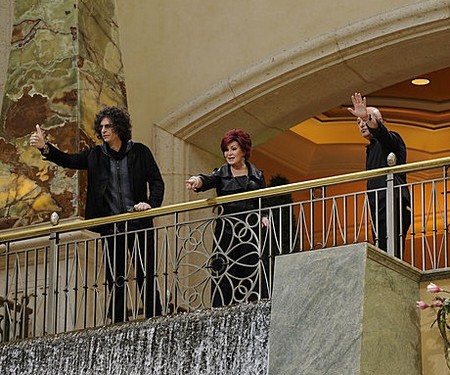 Tonight on NBC is an all new episode of America’s Got Talent. On tonight’s America’s Got Talent the boot camp continues in Las Vegas with Howard Stern, Howie Mandel, Sharon Osbourne and Nick Cannon in their search for the million-dollar act and deciding who would will make it to the top 48; which is now just one step away.  If you missed last night’s  episode, we have a full and detailed recap HERE for you.

Last night ‘The Horse’ was back and that guy just seriously disturbs me. The good thing is thought that Howard wasn’t that impressed when he kept his jeans on this time, so hopefully he won’t make it to the top 48.

Most of the female singers fell flat, nerves really got the best of them. Luna was so bad that the judges sent her home immediately. She had no energy, no fire on the stage – but the moment she was dumped, she was all full of fire when she started bad mouthing the judges backstage.

The opera singers didn’t too well either last night, mostly it was a show full of disappointments and I am hoping that America’s Got Talent saved the best for tonight.

There are three nights of Vegas, tonight is the second performance show and on Wednesday we will find out which acts make it through for a coveted spot in the top 48. Then the live show begins from New York on Monday, July 2nd at 9 PM with an amazing two-hour episode and the one hour results show will air the following night.

Tonight’s episode looks like it is going to be exciting and you won’t want to miss it, so be sure to tune in for our live coverage of  NBC’s America’s Got Talent at 9 PM EST!  While you wait for our recap hit the comments and let us know what you thing of season 7 of AGT so far!

RECAP: Tonight more acts get their one last chance to impress the judges.

The magic category is up.  The mind reader is first, Eric Dittleman and he reads Sharon’s mind. The strange thing is, Sharon made up what was on her mind, it wasn’t real. Taylor Reed performs, then Justin Rivera; but the judges have no reaction to either of them. Spencer Horsman submerges himself in a small cube filled with water, he is handcuffed with a blindfold on. Essentially he has to pick the lock that cuffs his hands together and the other locks that is securing his head and neck down. Time for the final lock, he does it and Sharon is concerned for his welfare, Howard loved it and so did Howie.

Vocal groups are next, Eric and Olvia are first to perform and they are very strong. Next is father and daughter duo, Maurice and Shanice Hayes, she slipped up a bit. Jorge and his little daughter Alexa are next. Howard felt that Alexa wasn’t all that prepared for the song.

Moving on now to comedians, Jacob Williams is first and gets a few laughs but Howard felt that his material could have been stronger. Summy Obeid is next, then Dave Burleigh, Kellen Erskine, Tom Cotler and Frank Roche who is the last one to perform and he tanks, awkward! The judges call out Frank back to the stage, Howard tells him that this was his big break and he blew it, they send him right home.

Time for the kid category and Sebastien is first, all the judges are smiling. Next is Isaac Brown and he thinks he did great. The Untouchables perform, the judges are all smiles again. Amazing Elizabeth performs and the judges seem to like her a lot. Next is Edon, he is adorable and a very talented singer, he reminds Sharon of a young Billy Joel.

Male singers are next and Ulysses is the first one to perform, he is the guy with the theme song voice. Jake Wesley Rogers sings  and plays the piano, Howard thinks he needs time to grow up. Tim Poe sings  country, Tim Hockenberry sings and plays the piano; damn he’s giving me goose bumps and Howard loves him as much as I do.

Crap, the Horse made it through, more seeing him smash his nuts in New York. Opera singer Andrew didn’t make it through, sad, he is very talented.

Stay tuned tomorrow night when the Vegas auditions continue with the stand-bys getting a chance at the last few spots.