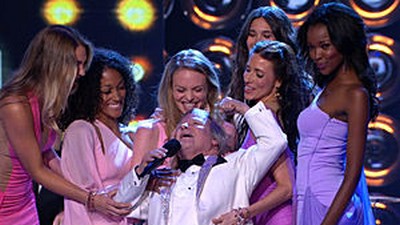 Tonight on NBC is an all new episode of America’s Got Talent. On tonight’s show it is the Elimination night. Twelve acts hit the stage last night, but only four will move on. Did you watch last night’s show? We did and we recapped it here for you!

On last night’s show it was Howie Mandel and Howard Stern feud night and Sharon Osbourne playing referee.  Contestant Big Barry the oldest competitor in the competition took the stage and Howard was totally pissed.  Howard was furious because he feels that Big Barry has no talent and a lot of good competitors were eliminated who should have gotten Big Barry’s spot.

Here is what the judges had to say about his performance – Howie – He comments if Bob Dylan and Easter Bunny had a baby….  He tells him he is not a good singer, but he is an amazing person and an incredible novelty act.  He feels he is memorable.  Howard – He tells him it is not about him – he tells Howie he has let a lot of people go but Big Barry should not have taken that place.  There were a ton of people who had a lot more people that had more talent than Big Barry.  He tells Howie he owes a lot of performers apologies.  He tells Big Barry he has no talent and it is offensive.  Sharon – She tells him he sings like he is on the toilet.   Howard continues to go on at Howie and demand an apology, which he does not get!!!

I totally agree with Howard, Big Barry has no talent, he is a nice man, but he has no talent.  Actually several of the competitors last night were horrible.  It should not be difficult for America to decide who will leave.

On the result show tonight Gavin DeGraw will be doing a special performance of his new hit single “Sweeter.” Plus, they will have a high-energy performance by the urban circus Traces.  Plus after tonight’s eliminations four acts will move on.

Tonight’s recaps: First on stage tonight is TIMHOCKENBERRY and TURF are going head to head.  Sharon says between the two just cannot decided she loves them both. America has spoken and  BOTH OF THEM ARE MOVING ON!! They will both be heading to the semi-finals.

We are treated to some filler Howie and his pranking people yawn….

More filler, what was happening last night after the show.

Up Next BIG BARRY, THE AURORA LIGHT PAINTERS, THE LISA CLARKE DANCERS, THE ALL WAYS  – Howard believes that is was a tough night for all four of the acts.  Moving ahead to the SEMI-FINALS is NO ONE – THEY ARE ALL ELIMINATED!

Up Next HAWLEY MAGIC, TOM COTTER, LION DANCE ME – MOVING AHEAD IS TOM COTTER!!!

Last up DANIELLE STALLINGS, DONOVAN & REBECCA, BEN BLAQUE America has voted and the act leaving the competition and GOING HOME IS BEN BLAQUE.

The judges now have to decide who gets to stay Danielle or Donovan & Rebecca.

Howard decides it is not Danielle’s time, but it is Donovan & Rebecca’s time so he votes for DONOVAN & REBECCA

Sharon loves Donovan & Rebecca but she feels Danielle has a lot of guts.  Sharon says she is lost – she cannot decides to put DANIELLE THROUGH!

Next week 12 more acts will perform competing for our votes.  Don’t forget to come back to this spot!!