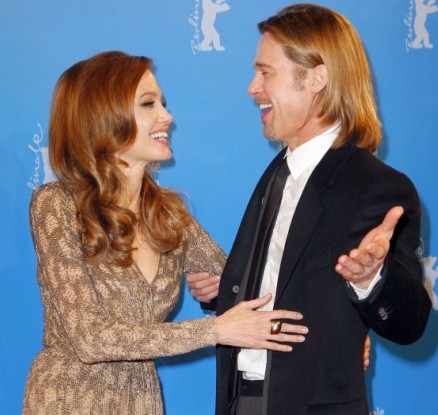 Angelina Jolie and Brad Pitt are hosting an Olympics-themed bash later this month and Prince William and Kate Middleton are at the top of the guest list. Hello magazine reports the A-list party is supposed to take place at London’s Victoria & Albert Museum on July 25 to start the games off with a bang.

OK, my head just exploded. It’s too much… too much! Those four people can’t all be in the same room together. The world might explode from all the pretty! And Prince Harry’s invited too! Will Harry eye f-ck Angelina all night? Of course he will. Will Brad sit Harry down and advise him to rope Chelsy Davy in and make an honest woman of her? God can only hope!

But is Angelina just using the Olympics as a reason to continue her obsession with Kate? Apparently she’s using the royal wedding as an inspiration for her own and was even considering making a movie about the young duchess.

Naturally, Angelina probably doesn’t want to look like a stalker so her cover is that the event is to honor heavyweight boxer Muhammad Ali and to raise money for Sports For Peace. ContactMusic reports fellow stars David Beckham and Victoria Beckham, Sharon Stone, Michael Douglas and Catherine Zeta-Jones are supposed to attend. It will begin with a champagne reception and end at the Jolie-Pitt’s home. “The who’s who of British and American celebrity will be in attendance, and invitees have been ordered not to take any photos from their phones,” a source told the Daily Mirror.

DAMN IT! But how will I see who gushes more – Angelina or Kate? How will I see who looks skinnier because that’s going to be a close race?! Will they talk babies? Of course they’ll talk babies. Will they give each other tips on how to stay away from food? I cannot wait for this to happen. Brad’s taken over party duties since Angelina’s too busy working so I have complete faith it will be a kick ass time. Those two can party. They just dished out $5,000 on curry! They know how to throw it down. Hopefully Kate will take the royal stick out of her ass and have a great time. Maybe Angelina will teach her a thing or two about letting loose?