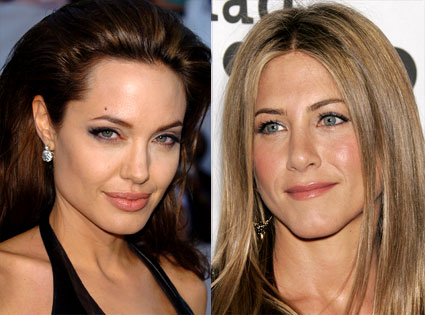 Angelina Jolie has said ‘Yes’ to Jennifer Aniston’s invitation for lunch but Brad Pitt is screaming ‘No.’  Poor Brad is aging rapidly as he fears the consequences of a meeting between his fiancée and his ex-wife!  Can you blame him? Angelina and Jen hate each other like poison and Brad knows that no good can come of the meeting of these two rivals.  Justin Theroux can’t be too pleased himself.  I mean why should Jen still be obsessing over Brad and Angie if she is happy with him?

Since Angelina slept with Brad while the two filmed ‘Mr. & Mrs. Smith’ in 2005 – which was while he and Jen were still married – Jen has made a career out of her mistreatment at Angelina’s hands.  Jennifer supposedly sent flowers to Angelina upon hearing of her engagement to Brad and this led to Angie calling Jen to thank her.

Can you imagine these two hated rivals pretending to be nice to each other?  During this putative call an arrangement was made for the girls to have lunch together this summer.   Brad fears they’ll both be bringing weapons and poison.

As we reported on CDL Jen’s true reaction to the announcement of Brad and Angie’s engagement was to dissolve in grief.  It is no wonder that Justin won’t propose to Jen – he is disgusted with her endless obsession with Brad and Angie.  Jen will never have Angie’s cache nor will she ever get Brad back – everything else just tastes like ashes to the bitter woman.

Here are the facts: Angelina stole Brad from Jen; Jen hates Angelina; Brad fears any and all interactions between the two women.  Read on below for an engaging and possibly true narrative…

National Enquirer Plus June 1 reports: Jennifer Aniston and Angelina Jolie have made a Lunch Date in London to bury the hatchet once and for all – and friends are hoping it won’t be in each other’s back!

The longtime, archenemies vowed to put aside their differences after Jennifer, 43, sent flowers to Angie, congratulating her on her engagement to Jen’s ex-husband Brad Pitt, Enquirer Plus learned exclusively.

The gesture prompted Angie to call Jennifer and thank her, which led to an invitation to lunch in London late this summer.

“Jen and Angelina have hated each other for years, and they’ve each thought long and hard about what they’d say if they ever got face to face,” says a friend of Jennifer.

Brad and Jennifer divorced in 2005 amid rumors that he’d been romancing Angelina, his co-star in Mr. and Mrs. Smith.  The two took their relationship public just weeks after Jennifer and Brad’s divorce was final.

Brad and Angie – the parents of six kids – announced their engagement in April.  “Jen wanted to show that she’s the ‘bigger’ person,” says another source. “Jen’s purpose was to make it look like she was letting bygones be bygones.”

According to another insider, Angelina was suspicious of Jennifer’s motives when she received the flowers.  The last time the two women spoke was three years ago, when a boozy Jennifer drunk-dialed Brad and got the shock of her life when Angelina answered!

“Jennifer was hoping for an intimate chat with Brad, and ended up tangling with Angelina,” the insider tells Enquirer Plus.

And that was fresh in Angelina’s mind when she suggested that the pair get together for lunch in London.

Now, Brad is said to be “freaking out” over the upcoming confrontation. “He envisions the two women pulling hair and punching each other over the bad blood they’ve harbored for years,” reveals the insider.  “He’s vehemently advised Angie against the meeting.”

So people – do you think this luncheon date will take place? If so will both women walk away from the meeting or will ambulances and police be summoned?  Let us know what you think in the comments below.