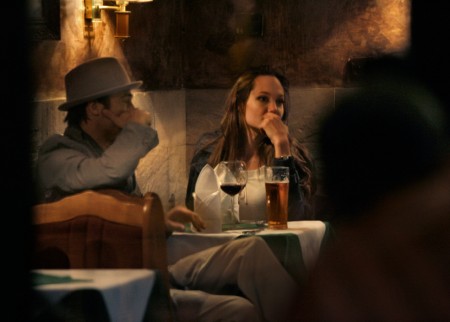 Perpetually hungry looking Angelina Jolie spent over $5,000 on a dinner with Brad Pitt at an Indian restaurant close to their house in London Thursday night. This had to have been a case of their eyes were way too big for their stomachs because I can’t imagine Angelina eating $5 worth of food the way her bones have been popping through her clothing lately. But the UK’s Sun said it was the curry that did it. Apparently Brangelina are cuckoo for curry.

And it wasn’t just them. Brad and Angie paid for a few close friends and their bodyguards to partake in the tandoori chicken and dal as well as some top notch bottles of champagne. “There were five friends and two of their bodyguards there and they ordered a mountain of food and booze,” a source told the Sun. “It might seem hard to believe that they ran up a bill of nearly £3,000 at a normal curry house but they are really generous and extravagant.”

So generous they left $1,000 tip. I bet those waiters didn’t think that was going to be happening when they tied their aprons that morning. Sadly Brad and Angelina put the kibosh on posing for pics. They told the staff they could hit them up next time. Next time!? I would schedule myself to work every day for the next two years since that’s how long the family is camping out in London.

But what gives? Were they celebrating their upcoming wedding or did they just feel like drinking champagne? Sometimes I get the urge to down bottle after bottle of it but I wisely stop myself because I don’t get paid $20 million to do anything. But it sounds nice, right? Brad was just in Cannes partying it up with his famous friends in a pre-bachelor party revelry. Was this more of the same?