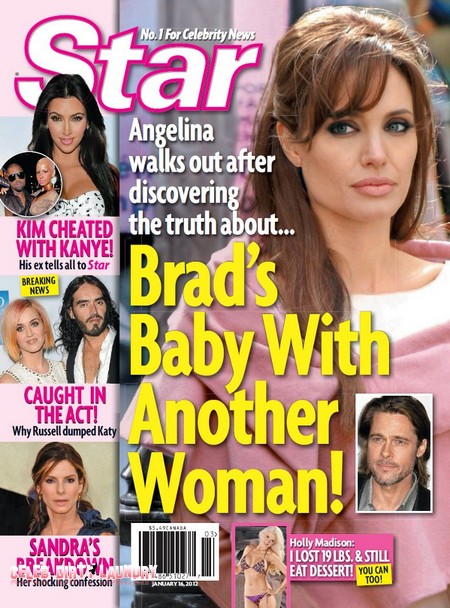 The current issue of Star Magazine features the explosive story ‘Angelina Walks Out After Discovering the truth about Brad.’  Yikes what a shocker Star magazine claims that Angelina Jolie walked out on Brad Pitt after she found out he had a baby with another gasp… women.

Star Magazine has the scoop: “A fuming Angelina Jolie stormed out after a huge blowup with Brad Pitt when she learned the bombshell news that he had tried to have a baby with another woman — his ex-wife Jennifer Aniston!  The truth came out: Brad and Jen tried to have a baby, but she miscarried. “He had never told Angie this before,” the insider revealed and added that the 36-year-old felt “betrayed.” “She had assumed all along that she was the only woman Brad had ever impregnated. Now Angie is questioning everything, including whether she can ever trust Brad again.” Betrayed and shaken, she walked out and left Brad with the children.”

What do you think, does Angelina have a right to be mad at Brad?  Sound out in the comments below and let us know.  Also featured in this week’s issue the magazine claims to have the details of why Russell Brand dumped Katy Perry.  The magazine alludes to the fact that Russell caught Katy in the act.    The magazine also has the details on Kayne West’s ex-girlfriend, Amber Rose, claims that Kim Kardashian is a cheating slut who destroyed her relationship with the rapper.  Although Kim has always insisted that she and Kanye were just friends, it appears that they were friends with benefits!

To find out the scoop on Angelina walking out on Brad Pitt and a lot more, pick up the current issue of Star Magazine.