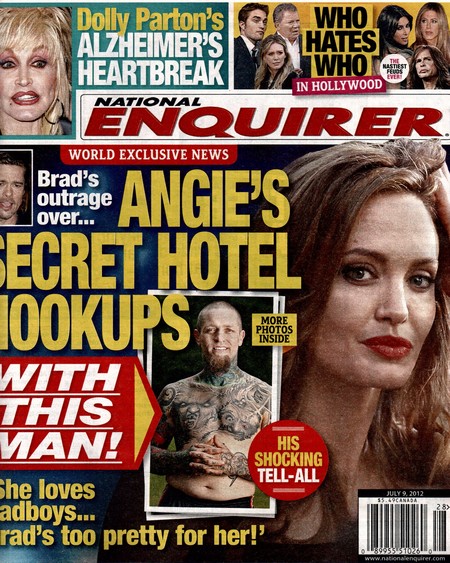 Angelina Jolie likes her men grungy and dirty according to a source who allegedly spent time with Brad Pitt’s finance partying in hotel rooms. Angelina used to sneak out of her house for these hookups but she has kept her hotel partying secret from Brad – and he is expected to go nuts when he learns about it. The source clearly states that Angelina was hooking up with the grungy bad boys and that Brad is not really her type!

The source says ‘Brad’s too pretty-looking and preppy for her,’ adding that ‘The guys I saw Angelina hook up with were the grungier, dirtier-looking types – like her second husband Billy Bob Thornton.  She loves the more rebellious guys, the bad boys.’   The source, Jasson Gellerstedt, goes on to say that Angelina was wild and loved to party… we can only imagine!

This shocking news is revealed on the cover of The National Enquirer Print Edition, July 9th, 2012 – with the headline ‘Brad’s Outrage Over Angie’s Secret Hotel Hookups.’  You’ll have to get the mag and read all the cool details to learn the rest of this remarkable story.  Suffice to say that Angelina is wild one!

The cover also discloses that Dolly Parton is panicking over Alzheimer news.  Apparently the country singer fears the worst!

We also learn the details of ‘Who Hates Who’ in Hollywood – as the nastiest feuds are disclosed.  We won’t give away the answers here but we see pics of some of those involved: Kim Kardashian, William Shatner, Robert Pattinson and, you guessed it, Jennifer Aniston.  Now what could Jen have to be upset about?  Didn’t she get over losing Brad yet?

We can expect lots of news and plenty of excitement when we read this week’s issue.  Let us know you opinion of the stories in the comments below