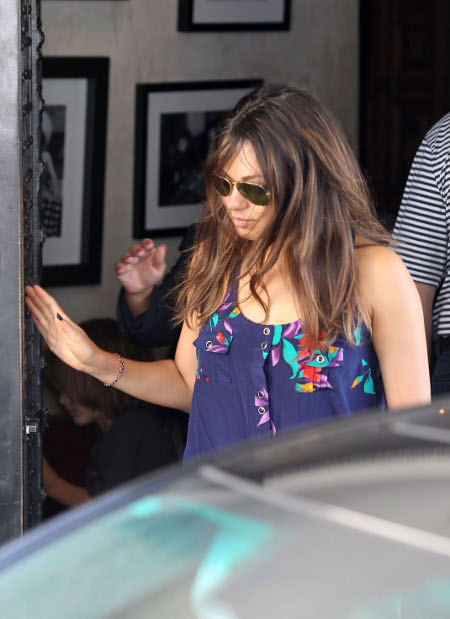 Ashton Kutcher and Mila Kunis have been getting hotter than a Los Angeles weekend, as new reports have revealed that he calls Mila his “little wife.” This is weird. A friend tells Life & Style Weekly magazine, “He’s calling her his ‘little wife’, which is cute, but kind of odd since he’s not divorced yet.” He is also allegedly “totally into Mila.” We told you so, Demi Moore!

Ashton and Mila have been dating since April and Mila is making it as clear as a nun behind a glass counter that she’s not planning to head down the aisle with Kutcher anytime soon. She recently revealed, “I’m not sure about marriage. I see no need. I’ll be with somebody because I want to, not because a piece of paper tells me I have to.” We agree, the whole institution of marriage has run dry on outrageous political campaigns and Facebook keyboard warriors.

The two love birds met back in 1998, when their careers were kick started by That 70’s Show. Back in 1998, the new millennium wasn’t even a factor and the people who used Windows 98 were freaking out over the Y2K bug. Sounds familiar, doesn’t it? It looks like 14 years haven’t changed many things, including the melting face of Demi Moore and Ashton’s childish mannerisms.

Another source says, “They seemed completely relaxed and happy with each other” during a recent lunch at the Los Angeles restaurant, Casa Vega, on August 12th. The snoopy diner tells Life & Style, “They laughed a lot.” That’s good, isn’t it? Ashton has jumped on Mila quicker than Honey Boo Boo jumps on fame, but his immoral decisions might be too quick for some to fathom. They say in the land of intelligent people and elves, “It’s not hard to make decisions when you know what your values are.” Let us know in the comments below your reactions to this sordid tale.