Ashton Kutcher Terrified Mila Kunis is Cheating on Him–Steals Her Phone and Tries to Catch Her! 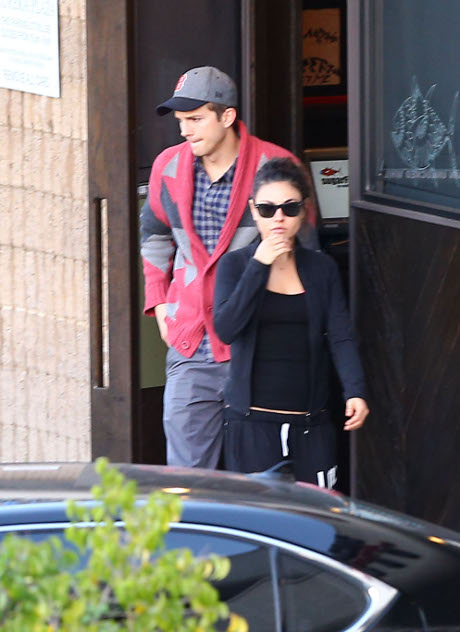 Someone needs to change their Twitter handle from AplusK to Psycho. There are reports that Ashton Kutcher, the Two and a Half Men star, was seen at a Thai massage parlor looking through girlfriend Mila Kunis’ phone while she was being attended to.

I guess when you cheat on your former significant other, Demi Moore, it’s only natural that you would be paranoid that karma would be coming for your ass as soon as you thought you were head-over-heels in love again. Perhaps your paranoia is your payback because I just can not imagine that Mila would cheat on you. Then again, she is a pretty good actress.

Celebrity-Gossip.net is reporting that when Mila went to the back for her massage, Ashton took it upon himself to start thumbing through her phone. Presumably to see if he could catch Mila cheating. Employees of the massage parlor say Kutcher appeared to be looking through Kunis’ phone in secret, as though he did not want her or anyone else to know what he was up to.

Ashton, an actor you are, but a secret agent you are not. You are going to end up killing your relationship like you killed Two and a Half Men. Tone it down and reign in your insecurity. If he is at a stage where he is questioning Mila’s loyalty, perhaps he is also becoming controlling. Or, maybe he was just looking for her agent’s number to help him save his career.

What do you think readers? Is Ashton a controlling psycho boyfriend bordering on paranoia? Is he just trying to keep his girlfriend in check and make sure she is only associating with the right kind of people? Is he looking for a way to save his own career? Is Mila Kunis cheating? Can we all agree that Kutcher single handedly killed any comedy relief on Two and a Half Men?

Stay tune for the impending break up due to “conflicting schedules.”