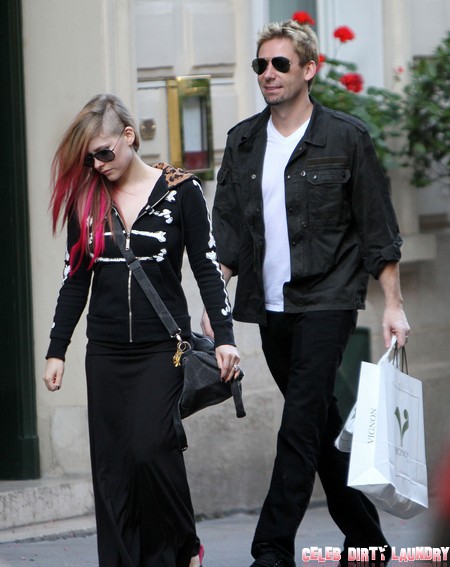 Avril Lavigne and Chad Kroger have been together for six short months, but when it’s love, it’s love! The pair are happily engaged and currently having a holiday in France. I’m always skeptical about the elusive “baby bump,” because it seems that any time a celeb has the tiniest bit of roundness at her stomach, whether in a tight dress or workout clothes, everyone screams “pregnant”! But Avril’s behavior matches the pictures. The Daily Mail reported, “When asked by Buzz if she was pregnant, Avril cackled and then said ‘are you?’ before running off.”

Most celebrities either ignore paparazzi taunts our outright deny them. Avril’s playfulness suggests that she doesn’t want to deny it, but can’t confirm it yet! Of course, in a few months it will be impossible to deny, so a little patience is needed. I doubt her rep will announce anything before she’s in her second trimester.

The couple got engaged last month, and Avril has already been talking about her wedding dress, promising it will be “bad-ass . . . either it’s something I’m going to design, or partner up with, collaborate with another designer.” I’m certainly skeptical about their relationship—don’t forget that Chad was her rebound guy after her two-year relationship with Brody Jenner (yes, son of Bruce Jenner, and, by several degrees of separation, brother of the monsters Kim Kardashian, Khloe Kardashian, and Kourtney Kardashian).

It seems too soon, and a baby after only six months will certainly complicate the relationship. In either case, they look happy together! Do you think she’s hiding something? Will this marriage last longer than her first?

Singer Avril Lavigne and Chad Kroeger spotted out shopping for food in Paris, France on September 13, 2012. The couple left their flat around 6:30pm to buy wine and food at the famous Traiteur Vignon before returning home to make a romantic dinner