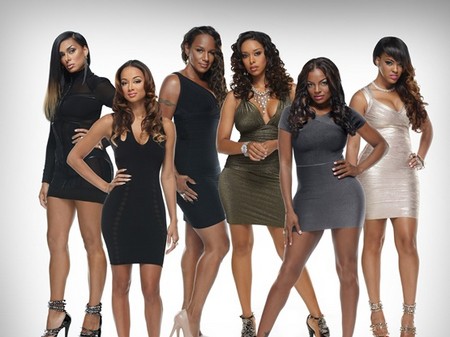 If you are a Basketball Wives L.A. fan then I’m sure you’re wondering what the heck was cut out of the most recent episode, right? I know the show’s ratings haven’t been great but I also know these ladies do have some fans out there that want to know what the heck really went down. I generally think Brooke Bailey is one of the calmest, most grounded chicks in this group. She doesn’t let too much bother her and she seems to prefer to break up fights rather than initiate them. I dig Brooke. She’s my favorite and so I was shocked to see her- of all people- be the one to really go after Jackie Christie. You know, “Crazy Jackie” who seems like she does have revolving personalities working against each other on any given day.

Let’s be real here. This is a cast of hood rats in expensive clothes and all of them have a major issue with Jackie. They are all down for a fight and the target is usually her, but no one actually has thrown punches until now.  Brooke had originally shown up to have lunch with the whole group, having an issue with Malaysia Pargo.  The two talked and seemed to work it out at least temporarily and then Jackie got in Brooke’s face and things went downhill super fast. Producers edited out the punches that flew but we did see Brooke’s necklace on the ground and Jackie’s weave was ripped out. Obviously, Brooke won this round and she told Bossip a bit about it,

“Jackie Christie threw the first kick and after that I beat her ass. PERIOD!!! NONE of my cast members can beat my ass. Do I feel bad about about fighting Jackie? Of course, she’s close to my mothers’ age and I was taught to always respect my elders. Going forward can we be cool? Yes, she’s crazy and I like crazy.”

Brooke does seem like the type that can fight and then walk away as if it never happened. Do you think Jackie will need to take Brooke to lunch to try to talk things out so that she can be friends with her again? Isn’t that Jackie’s typical approach? Are you shocked that it was Brooke that laid out Jackie? Tell us your thoughts in the comments below!