BY Newsbylisa on June 12, 2012 | Comments: one comment
Related : Basketball Housewives 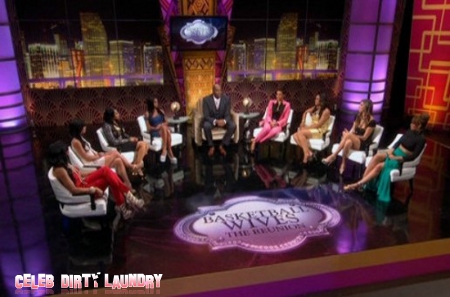 Season 4 of Basketball Wives ended after part two of the reunion episode, during which all of the wives, including Evelyn Lozada and Jennifer Williams, hung all of their dirty laundry out to dry!

Tami Roman addressed Kesha Nichols, and not for nothing  either! She’s not wrong — if you have a big mouth and want to talk, then you go for it. Look, she did not do it in a bad way, she just called her on the carpet for it. Good for you, chica. Kesha always wants to look so innocent; well, if you want that, then shut up and stop running you’re mouth!

Then here you go with the whole Evelyn and Jennifer saga, which, to tell you the truth, I’m bored with. It turns out that the polygraph said that, yes, Jennifer is jealous of Evelyn’s engagement to Ochochino . . . . Big surprise! Not! Honestly, who did not call that one? That one is just a bitter witch! Anyway they ended up forgiving each other and hugging it out, but it looked a little awkward.

When Shaunie O’Neal was asked if they would come back for another season she hesitated, but, because doing the show also means a fat wallet, of course she said yes — let’s not be stupid! All of that going to the priest to get consulting . . . come on, that was for TV, I’m sure. So will I be watching the next season? Absolutely!