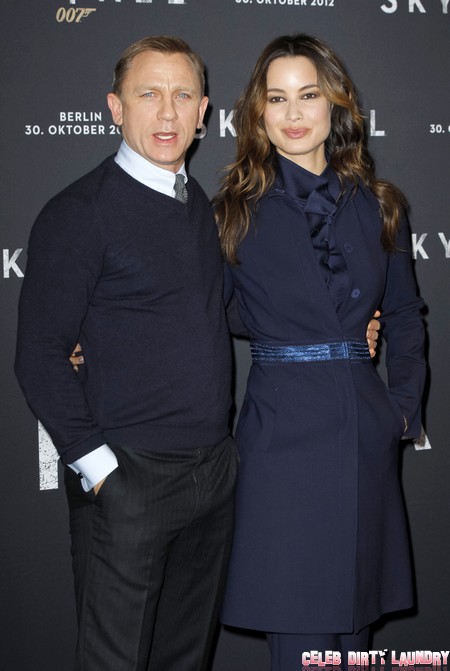 The 23rd James Bond film, Skyfall, has been touted as the greatest Bond film ever made. The Adele voiced theme song has already surpassed all expectations, and went viral within a matter of hours after the release. Daniel Craig is back to catch bad guys with gadget wizardry, fast cars, and sexy women. However, Craig is not the only shining star in the Bond universe, as the hottest, craziest, and most exciting Bond girl of all time, Bérénice Marlohe, is cast as the iconic and dangerous Séverine. Celeb Dirty Laundry did some investigation to find out exactly who the French femme fatale really is.

This mesmeric Catherine Zeta Jones/Penelope Cruz blend not only enchants the silver screen, but also brings an air of elegance to the Bond films. Marlohe achieved fame through several French television appearances and a few French made-for-television films. Born to mixed ancestry in Paris, France, Marlohe studied art at the prominent Conservatoire De Paris for ten years, before being cast as a bit actress in a couple of French television shows. Marlohe was cast in the French television show, Un bonheur n’arrive jamais seul (Happiness Never Comes Alone), alongside former Bond girl, Sophie Marceau (The World Is Not Enough 1999). She also had a bit role as “Sporty” in the 2011 independent French film, L’Art de séduire (The Art of Appeal).

Marlohe also holds a very strong belief in fate. She claimed to have had a dream about acting alongside Spanish actor, Javier Bardem, six months before Skyfall was cast. In an eerie coincidence, it was only after the second audition for Skyfall that someone mentioned that Bardem would be cast in the film. Marlohe believed that after the dream, her life would come to fruition. She was correct.

Sam Mendes, the director of Skyfall, told GQ magazine, “She has that thing that many of the classic Bond girls have, which is that she’s a real woman with a mature sexuality. But also there’s a real mystery to her. She has this Asian heritage, which for us in the story – her part of it takes place in Shanghai and Macau and out in the South China Sea – was perfect. In some light she’s Western, in some lights she’s very exotic.” It is this exotic beauty that blocked Marlohe’s film career in France. Her Cambodian/French heritage failed to deliver any notable film roles, as many French producers and casting agents did not believe she could fit the mold of a traditional French actress.

Marlohe admitted to GQ magazine, “What happened, in France, is that the agent I had got me so few auditions that I tried to get another agent and all the French agents told me, ‘No, you don’t look like a French actress, this will not work. Even people who saw me in acting workshops and wanted to introduce me to people; when those people considered my picture, they said, ‘No, she will never work in France.’ I don’t know what to say. I was not in the mould.”

Marlohe has been labeled as “the sexiest, deadliest, Frenchiest Bond girl of all time.” This is a palpable truth, even if we have to say so ourselves. Fortunately, Marlohe will never have to make excuses for her heritage, ever again, because this Bond girl is best shaken, not stirred.