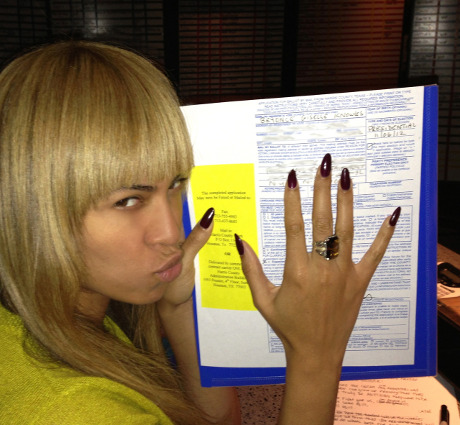 There They Go! Beyoncé voted in the presidential election. How do we know because she posted a photo of herself with her ballot to Tumblr. Now we all know who she voted for because it’s not anyone’s guess, it’s not a secret. Beyonce and her husband Jay-Z held a fundraiser this year for President Obama.

She had to file an absentee ballot because she is registered to vote in Texas. The weird thing was that this chica posted a picture of herself and the filled out ballot. Now posting a filled out ballot could be illegal in some states. The law in Texas prohibits all recording inside the polling place, so we don’t know if Bey Bey is in trouble but we’ll hazard a guess… probably not!

Now across town her hubby, Jay-Z, was doing his humanitarian thing. When hurricane Sandy hit and blew out the power to his apartment building he went out and purchased a generator to provide power for the residents. He got a huge generator so they could have temporary power to ride out the storm until power was restored. Is this altruism? Meanwhile Jay-Z took Beyoncé and their daughter Blue Ivy Carter (rather, their many servants did this) to a luxury uptown hotel to ride the storm out.

I say this for Jay-Z, he never forgets where he came from and he does a lot for his community. Quiet as it’s kept, I know I said a few things about them in the past, baby story, but you know as long as they are feeding that little chica and keeping her safe and warm who am I to talk, and I apologize to them. They seem like a very loving down to earth couple, as much as that can be, considering their combined millions of dollars, and wish them all the best. Bravo to the both of you!