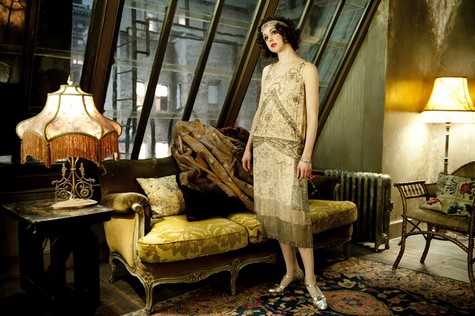 Tonight on HBO is an all new episode of BOARDWALK EMPIRE called “Ging Gang Goolie.” Can you believe tonight marks the half way point of season 3 already? On tonight’s after being detained in Washington by Daugherty’s henchmen, Nucky approaches Esther Randolph (Julianne Nicholson), his onetime nemesis, and later entertains an intriguing proposition from Gaston Means. If you missed last week’s episode five called “ou’d Be Surprised”, we have a full and detailed recap here for you!

On last week’s show after tearing a strip off Nucky about his liquor problems, Rothstein sent Gyp an unequivocal message in Tabor Heights. In Washington, Gaston Means saw and opportunity in a Senate investigation of Harry Daugherty and the Justice Department. Billie gots a new co-star to revive her faltering show; Van Alden and Sigrid received an unexpected visitor; Gillian worried about keeping her business afloat in Jimmy’s absence; Margaret had awkward moments at the hospital and, later, at Madam Jeunet’s.

On tonight’s show it looks like many threats are closing in.  Margaret Schroeder is at home with her children and her son Teddy tells her he was looking for the man, “He was here!”   It seems someone was at Margaret’s house, as we see Owen looking around, what happen to the guards Nucky was suppose to post?  Later Margaret is sitting down with Owen and she asks him if it was Gyp Rossetti.  Remember on last week’s show Arnold Rothstein sent a clear message to Gyp when they sent Benjamin to kill him.

Of course Gyp probably thinks that it was Nucky who arranged the hit, and Gyp is crazy at the best of times so……  It looks like everyone is looking for Gyp – Eli goes to the diner in Tabor Heights and tells them if they see one hair on his greasy head, they call him.  Gillian feuds with Lucky and finds a surrogate for Jimmy. Richard connects with a pugilistic vet named Paul Sagorsky and his daughter, Julia.

Tonight’s episode is going to be another action packed one, which you won’t want to miss. So be sure to tune in for our live coverage of HBO’s Boardwalk Empire Season 3 Episode 6 — tonight at 9PM EST! While you wait for our recap, hit the comments and let us know what you think of Boardwalk Empire season 3, so far!

Tonight’s recap: Tonight’s show opens with Margaret sleeping and she wakes up and Teddy is there, he tells her there is a fire.  Margaret looks out the window and the greenhouse is on fire she sends Teddy to go to his sister.

Her neighbor shows up and  asks her if there is anything outside in the greenhouse and Margaret says she has never been in there.  Margaret is informed whatever is in the greenhouse burns fast.  Owen questions Teddy what he saw.  Teddy tells Owen and Margaret he saw a gypsy with a bag earlier in the day.  Owen asks him if he saw him recently?  Margaret sends him to bed.

Owen tells Margaret he would not make too much of it.  Margaret wants to know if there is nothing to be worried about, why is he there.  Margaret asks Owen if it was Gyp Rossetti that Teddy saw because they have his dog.  Owen assures her it was not Gyp, his business is over with Gyp.

Nucky goes to a hotel room and asks the maid where Mr. Gaston Means is?  George Remus  walks in and Nucky tells him it appears they have both been stood up.  Nucky asks what he makes of it.   George Remus has a number for Means and he tells Nucky he will call him.  The maid tells them they cannot use the phone and Nucky and Remus leave.

Attorney General Harry Daugherty is giving a speech to the boy scouts.  Jess who is sitting next to Harry starts to cry he tells Harry they stole.  Harry tells the people Jess ate something bad.

Margaret is doing Teddy’s lessons with him, she assures Teddy they are safe.  Teddy thinks the fire started because Nucky was not there.  Teddy wants Owen to live with them.  Margaret tells Teddy they have to be careful so nothing happens again.

Nucky walks into a house and there are several men there, he barges in to a room where Harry, Jess and Remus are.  Nucky wants answers and he wants answers now.  Nucky is pissed because Gaston Means did not show up and Harry did not inform him.  Nucky wants to know how much trouble Harry is in.  Nucky wants to know who the patsy is Harry is giving up?  Nucky suggests that Harry give Remus up and Harry tells him that will never happen.  Nucky tells Harry if he brings him down, Harry is going down lock, stock and barrel.  Harry asks, who they will believe a bootlegger from new Jersey or an Attorney General.  Nucky tells Harry, they will find out.  Nucky leaves and Means comes out and Harry tells Means that Nucky needs a lesson.

Richard Harrow comes into the bar and the men/vets are complaining.  A man Paul Sagorsky is complaining and he toasts the other men in the bar and calls them a bunch of saps.

Nucky has two men walk up to him and they asks him to stay awhile, they are from the state justice apartment.  Nucky tells them he has a train and he is leaving, they asks, what he has in his bag.  They grab his bag and there is a small bottle of alcohol and they cuff him and tell him to stick around, courtesy of the Attorney General Harry.

The female neighbor Mrs. Predick knocks on the door, she found Teddy on her property.  She found Teddy in her garage with stuff to set a fire.  She promises not to tell, she tells Margaret if she wants to talk she is a good listener.  Teddy tells her he did not burn the greenhouse.  Teddy tells Margaret the gypsy man was going to burn the garage up because he likes to burn things up.

Margaret is distraught because she does not know what to do about Teddy. She tells him to turn around and she wallops him.  Then she send him to his room.

At the bar Paul Sagorsky and another man are having a fight, while Richard and other vets watch.  Paul gets knocked out.

Nucky is in jail and he is pissed 18 hrs without a phone call.  One of the men in the jail introduces himself as Mr. Gold.  Mr. Gold is in the hootch business and they nabbed him with 5 cases, he has a still in his basement.

The guard comes and calls for a few of the men to come out, Nucky’s name is not called.

Over at Gillian’s she is talking down pictures of Jimmy and putting them away.

In court they are prosecuting someone for alcohol and the judge charges $5, the prosecutor is not pleased.  Next they bring Nucky in, Ms Esther Randolph was not aware that Nucky was being brought in.  Ms. Randolph asks for a one year sentence in jail and a $2,000 fine.  The judge says $5 and tells Ms. Randolph they courtroom is not the place for her to get satisfaction.  Nucky goes to pay his fine.

Gillian is walking and she sees a group of men and offers one a cigarette.  Gillian asks the man if he is from Atlantic City, he is not, his name is Roger McAlister.  Gillian asks him if he has ever dreamed she thinks dreams are where they should live.  Gillian thinks Roger reminders her of someone.

Gillian is having sex with Roger, who she just met, of course we know it is because he reminds her of Jimmy.  Gillian tells Harry he has taken him back to how she use to feel.  Roger tells Gillian that he is going to have to leave the Boarding house where he is staying because he is bust.  Gillian tells him she may find him something, but she is going to call him James as a nickname.  Yikes, she is such a perv.

Margaret is giving the kids lessons and Owen comes in.  Owen tells Margaret that they caught the vagrant/gypsy he had been lighting the fire in the greenhouse to stay warm and Owen took care of it.

Richard comes to Paul’s house and gives Julia her father’s jacket and a medal that fell out.  Julia tells Richard she would invite him in but her father is in a mood and she does not want to set him off again.  The medal belongs to her brother who died in the war and he cannot accept it.

Margaret goes out and tells Mr. Murray that Nucky said he should no longer himself with them now that the danger is gone.

Teddy and his sister are in bed.  Teddy tells his sister the gypsy man lives up the street and he use to be a rabbit but he turned into a man and when he does not like people he burns them up.  Teddy says he knows Daddy is not there and that is why he comes.  But he tells his sisters if he comes, and he goes under his pillow and gets a knife, he will stick the knife in the eye of the gypsy if he comes.

Billie comes in and finds Nucky and asks where he was, he missed her opening.  She tells Nucky the show went great.  The phone rings and it is Gaston Means, Nucky wants to know where he got the number.  Mr. Means is offering information to Nucky for $40,000.  Mr. Means offers Nucky info that will help both Nucky and Esther Randolph.  Nucky tells him to come to New Jersey there will be a suite waiting at The Ritz.

Margaret is brushing her hair before bed and she hears a noise.  She calls Katie and tells her she needs Mr. Slater.  Katie does not know where he is.  Margaret goes and gets her shotgun out of the closet.

Richard is looking at pictures of his sister from 1916.

Margaret is walking though the house with the shotgun loaded and ready.  She opens the door to go outside and sees a light in the greenhouse.  She runs to it with her shotgun and tells the man to stay where he is.  It is Owen with a light looking in the greenhouse.  Owen tells Margaret, Nucky sent her to check on her and the kids.

Margaret tells her that Katie is looking for him, which does not please him, she keeps to close a watch on him.  Owen wishes her goodnight and Margaret tells him wait!

Owen tells her he does not think it is wise and Margaret tells him but they both know how to keep a secret and she starts to kiss him.  They head into the greenhouse to make-out.