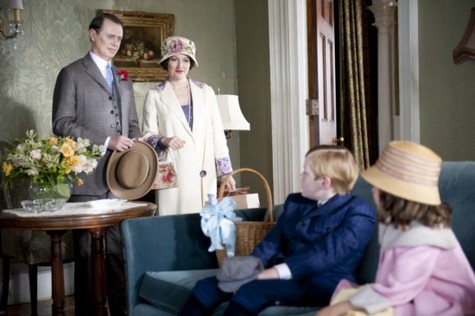 Tonight on HBO is an all new episode of BOARDWALK EMPIRE called “Sunday Best.”  On tonight’s show on Easter Sunday, Eli looks to get back in Nucky’s good graces at a Thompson family reunion. Gyp is also back tonight and he is back with a vengeance. He tries to have a conversation with Nucky about the New York shipments.   Did you see last week’s episode?  We did  and we recapped it here for you.

On last week’s show after being detained in Washington by Daugherty’s henchmen, Nucky approached his onetime nemesis, Esther Randolph, and later entertained an intriguing proposition from Gaston Means. In Atlantic City, Margaret coped with Teddy’s demons while Owen investigated a suspicious fire, and Gillian feuded with Lucky and found a surrogate for Jimmy. Richard connected with a pugilistic vet named Paul Sagorsky and his daughter, Julia.

On tonight’s show while Richard and Tommy spend the day as guests of the Sagorskys, Gillian stays at home and makes a sacrifice to improve her future. In New York, after dinner and prayers, Gyp heads downtown in search of a blessing – from Joe Masseria.  Gyp is back and he is back with a vengeance, he has Lucky Luciano, Nucky Thompson and Arnold Rothstein in the cross hairs of his sight and he wants them dead!  As a matter of fact he says he is going to kill them all.  Gyp is not going to easily forgive the failed hit on his life.

Tonight’s episode is going to be another action packed one, which you won’t want to miss. So be sure to tune in for our live coverage of HBO’s Boardwalk Empire Season 3 Episode 7 — tonight at 9PM EST! While you wait for our recap, hit the comments and let us know what you think of Boardwalk Empire season 3, so far!  Check out the sneak peek video of tonight’s episode below.

Tonight’s episode:  Tonight’s show opens Eli looking for a place to hide the Easter eggs he has in a  box.  Gillian is lying down and Richard comes in, she has had Richard tell everyone to leave.  Gillian asks Richard what the event he is going to is?  He replies it is for veterans.  She tells Richard that Tommy is not to be exposed to any violence at the event.  She tells Richard to take $10 from her purse.  Gillian is upset because it is Easter and it is a bad day for business because customers feel guilty.

Teddy’s sister is telling him everyone of their relatives names.  Margaret, Nucky and the kids are going to meet their cousins.

Roger comes over to Gillian’s house, he thinks she is rich.  Gillian tells him she can barely keep the lights on.  He suggest she sell, but she does not want to speak to him about real estate.  Gillian has emptied the whole house out so she can have Roger to herself.

Emily struggles to get up the stairs at Eli’s house.  Margaret tells everyone not to help her unless she asks.  Nucky introduces all his neices and nephews to Margaret his wife.

Richard and Tommy go to visit Paul and his daughter.  Richard brought her flowers.

Eli and Nucky are sitting together.  Eli asks Nucky if all is going smoothly, Eli tells Nucky that Mickey does not tell him anything.  Eli tells Nucky he is glad he came, they don’t have to talk to each other.  Eli just wants them to have a nice dinner.

Eli’s wife June thanks Nucky for all he has done for them, she welcomes Margaret, Teddy and Emily to their house.

Over at Paul Sagorsky’s house the vets, Richard and Tommy are having dinner.  Paul is being belligerent and Julia tries to get him to stop.  Julia asks Richard to join her in the kitchen, she apologizes for her father’s behavior.  She has brought Richard his dinner in the kitchen so he can eat where no one can see him.  She figured it would make Richard happier to eat away from everyone.

Gyp is meeting with his employee.  He tells Gyp they lost a lot of turf with Tabor Heights.  The man tells him they do not have the man power they need anymore, he gives Gyp and envelope and it is thinner.  Meanwhile Gyp’s Mother makes Gyp come out to dinner and she invites Gyp’s man to dinner.  He does not want to, but Gyp gives him a look and he agrees.

Roger and Gillian are having dinner.  Roger tells her to put her house up for sale and they could hit the road.  Gillian wonders if he is trying to take advantage of her.  His answer is to have her hike up her dress

Richard comes back to the room where everyone is having dinner.  Tommy asks to go upstairs to go to the bathroom, but Tommy decides to investigate.  He opens a door upstairs and finds a room with flags and little toy soldiers.

Eli asks Nucky if he went to church that morning, he tells him he has to he is a knight now.  Eli wonders how he managed that, Nucky tells him he lost a lot of money.

Eli tells Nucky he did 16 months, he lost a lot of time with his family.  Nucky tells him he has  a job.  Eli tells him he cannot take it anymore, he works for Micky Doyle and he takes Micky’s crap.  Nucky tells Eli he thinks he is bottomless, Eli keeps taking and taking.  He tells Eli that he has sat with his enemies and he cannot take that back but still he calls himself his brother.  Nucky tells Eli he hurts him.  Eli gets a gun and tells Nucky to take the bullet and put it in him, he is sick of waiting for it and he knows Nucky is going to shoot him one day.

Nucky asks him why it always has to be melodramatic.

Roger and Gillian are in bed and he asks Gillian about the person who gave her all this.  Gillian tells Roger the man was younger than her but they put that aside for a while.  She tells Roger that the man walked out on her and she has never seen him again.  (We know she is talking about Jimmy, she is such a perv)  Rogers asks her to go to Cuba with him.  He wants to have sex again, but she wants a bath with him.

Paul comes in and catches Tommy in his son’s Freddies room playing with the toy soldiers.  Richard comes up to Paul and tells him to let Tommy go or he will kill him.  Paul tells everyone to get out of his house and closes the door to his sons room.

Julia sees everyone to the, all the men offer to help if she needs it.  Richard is leaving and he tells Julia she should leave too.  Julia agrees.

Eli’s daughter is playing a musical instrument for the Thompson family.  The kids asks Nucky to perform, Nucky agrees.  Nucky starts juggling eggs and telling stories to the children.  The children are pleased.

They asks Margaret to go next and she agrees.  Margaret starts to sing in a very pretty voice.

Richard, Julia and Tommy are walking in a fair and Richard tells Julia he had a wonderful time.  Julia asks Richard not to threaten to kill her father, he is a mean drunk but still, he is her father.  Tommy is sulking and Julia tells Richard that Tommy needs to go home.

Gyp is in church complaining to God because he put him in this game as Gyp says.  He tells God he gives him things he can see and almost touch and takes everything away.  Eli complains he is suppose to go through life no friendship and no love.  He asks God how is he suppose to trust him, with the way he treats him, he wants an explanation from God.  A Priests comes up to him and asks him if he is alright.  Gyp tells the Priest he is praying, the priest replies he is yelling.  Gyp asks the priest if he can ask him something.  The priest agrees he can, Gyp gets up and hits the priest and takes his money,  he yells at the priest to get the rest of God’s money for him.

She goes to gets a necklace and puts it around his neck and lays a syringe near his hand.

Gyp goes to see Joe Masseria – he is not pleased because Gyp caused a war in New Jersey.  Joe is not happy with Gyp because he cannot control him.  Furthermore, Gyp showed up with part of his payment in coins. (the money he stole from the church)  Gyp tells Joe he is his guy.  Joe tells Gyp he cannot depend on him.  Gyp tells Joe, Nucky Thompson, Arnold Rothstein they are working together on something bigger than what Joe has.  Gyp tells Joe that they are building something with Lucky Luciano that does not include Joe or Gyp.  Gyp tells Joe Masseria what  happens to us if Arnold, Nucky and Lucky build together?  Gyp tells Joe he is going to be in a war whether he wants it or not.  Joe asks Gyp if he is going to save him sarcastically.  Gyp responds, give me the juice I need and I  will kill them all.  Gyp tells him when he brings them to him, they are not going to call him Joe the boss, they will call him Joe the King.

Joe turns around and tells his employee to bring them two coffees.  He comes back and sits with Gyp.

Margaret is impressed that Nucky can juggle, Nucky offers to teach him, but Margaret tells him it is too late.

Eli goes to see his wife June she has her head down and she tells Eli she is just taking a minute.  Eli tells her to go to bed and tells her she did a great job.  June liked Margaret but she does not think she is happy.  Eli tells June it is Nucky and Margaret’s problem.

The phone rings, it is Nucky, he tells Eli he was the only smart one with the mess at Tabor.  He tells Eli starting tomorrow he is running the warehouse with Mickey.  He thanks Nucky,

Nucky tells Eli the whole family had a good time.

Richard is looking at the picture the man at the fair took of him, Julia and Tommy and pastes it in his book.  Gillian knocks at the door.  She asks if she is interrupting, Gillian wants to know how the afternoon went.  She tells Richard the girls are back.  She asks if Tommy behaved and if he was exposed to any necessary vulgarity.  Gillian then tells Richard her son is dead and nothing on earth will bring him back.  She cries… All of a sudden we hear the girls screaming…  I guess they found Roger body.