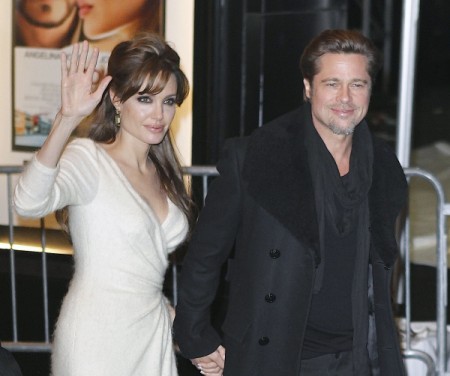 Angelina Jolie and Brad Pitt are going over the guest list for their upcoming Fall wedding and Prince William and Kate Middleton have made the cut.

I still don’t think anyone out of that group has met each other before, but what does that matter? Angelina Jolie is the bride and she’s going to get whatever she wants on her big day! It is her third big day after all!

Now magazine said the A-list Hollywood couple plans to say “I do” at their French estate, Chateau Miravel, at the end of the summer and are budgeting just under $5 million for the big event. I don’t think Prince Charles paid that much for the royal wedding!

Will Angelina bring up the invite at the Olympics party Brad’s throwing in July? In addition to celebrity all-stars like Michael Douglas and George Clooney, Brad is planning to invite the Cambridges to that little soiree. He must be hoping they’ll become besties fast enough so he can send out the invitation that Angelina already has stamped and sealed and ready to pop into the mailbox.

Do you think Kate and William would make an appearance at the ceremony? If I were Kate, I would want nothing more in the world, but royal pressures might keep them from attending a Hollywood wedding. Princess Diana always got tons of criticism from senior royals for her friendships with celebrities and Kate is loathe to make her same mistakes. But it would be worth it, don’t you think? I would take an earful from Queen Elizabeth and some cutting eye rolls from Princess Anne just so I could watch Angelina walk down the aisle! Honestly, how many more times will Kate get to see Angelina say “I do”? On second thought, maybe she can skip it!