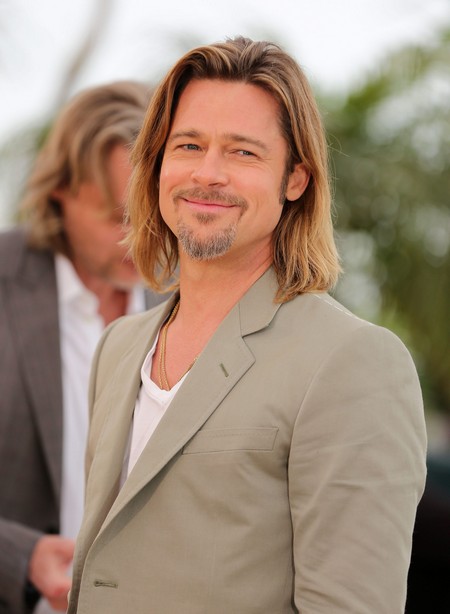 Brad Pitt and Angelina Jolie have been together longer than emo kids have been depressed and there’s no sign of slowing down. Their longtime friend Robert Procop (thou shall not make Robocop jokes) has spoken to Us Weekly about the mushy couple. Robocop met Jolie after dressing her for the Oscars many years ago and proceeded to shoot naughty Russian villains.

Procop told Us Weekly, “Brangelina is a very romantic couple. They always knew they’d be together forever and get married one day, right from the start.” Procop is collaborating with Jolie on a jewelry collection called Style of Jolie. The proceeds will go to Jolie’s philanthropically oriented Education Partnership for Children of Conflict charity.

Brad and Angie met on the set of Mr. and Mrs. Smith. Brad proceeded to poop in Jennifer Aniston’s breakfast one fine morning. Aniston is now a fumbling neurotic and Brad looks like a Beatles song. Angelina… well… She has a leg the length of France.

Procop said, “The relationship may have been all flying planes and riding motorcycles at the start, but any new relationship is exciting that way,” he says. “Now though, they’ve settled into this wonderfully strong family unit and it’s beautiful how in love they are.” Yes, Procop, because you like the flying of the planes and the riding of the bicycles, don’t you? You Robocop doppelganger!

He adds, “They’re both lovely, very talented people that compliment [sic] each other . . . when you’re with them, you can see how strongly in love they are.”

Brad and Angie have been getting custom gifts (and knives) from Robo Pro, or whatever his name is, for the past several years. “Angelina came to me six years ago to create a pendant for Brad as a present,” he reveals. “She’s very clever and had this idea that it would be like an ancient tablet, and she researched it looking at old Chinese and Egyptian scripts . . . [it] has a love letter from him to her inscribed on it.”

Brad turned to Procop to design the engagement ring, because not turning to Procop would have resulted in the loss of both his limbs. The fine piece of jewelry boasts an estimated 16-carat, emerald-cut diamond worth approximately five hundred thousand dollars.

Their wedding bands are kept secret, “Over the years, I have been entrusted with some wonderful secrets,” Procop teases. “I’d never share something that should be between two people and that is very romantic and special and something for them.”

Please, for the love of God, don’t force this man into revealing any of their secrets! We really don’t want to wake up one morning with our hands in Procop’s duffel bag of “jewelry”.

Okay, yes, we promised no Robocop jokes, but if your last name sounds like the nickname of a tattle tale, you know you have a serious problem.