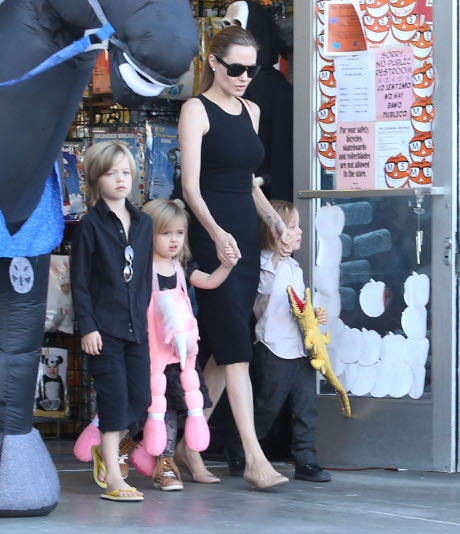 Brad Pitt and Angelina Jolie’s children must be a terrorizing force to be reckoned with. There you are, chewing on your pizza slice, sipping juice from a straw, chilling with your thoughts, when, all of a sudden, all hell breaks loose. A crazed Brangelina kid rips the bolted chairs from the floor, kicks a waitress between her legs, and hunts you down like a policeman with a bad case of paranoia. This is not a dream. This is reality.

According to a latest Us Weekly report, Brad and Angelina’s children, Maddox, Pax, Zahara, Shiloh, and twins Vivienne and Knox, “jump on tables and throw food at each other” at Brad’s hometown pizza parlor in Springfield, Missouri. “The place shuts down for the entire night and the kids raise a ruckus,” says an insider who works at the restaurant. “[Brad and Angelina] leave their nannies at home and let the kids enjoy themselves,” continues the quite obviously terrified source. Allegedly, Brad and Angelina also relax and loosen up the dictatorship on their small tribe of child snot and vajayjay punching. The source adds, “Brad and Angelina just sit there and talk to one another while the children run around in circles.”

The couple divides their time between their properties in Los Angeles and their Miraval estate in France. They do, however, pop into Brad’s hometown ever so often to let off steam. Whilst we’re all for celebrity spotting and chilling in a restaurant with the Brangelina bunch, we’re not for being terrorized by out-of-control villains with a penchant for the insane. Hey, we have an idea! Maybe, just maybe, Brangelina should invest in a small island and send their brood to battle it out ala Lord of the Flies? It could be turned into a reality show! Think about it, mmmkay?

Would you be able to handle crazy Brangelina kids at your favorite hotspot? Let us know your thoughts in the comments below.