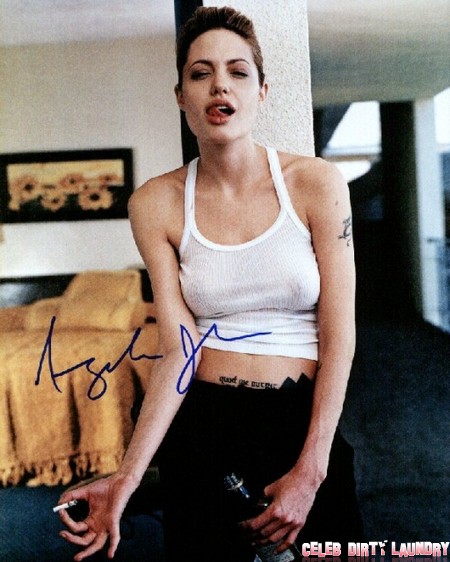 Brad Pitt and Angelina Jolie have never been a traditional couple, so it makes sense that they would swap the exchanging of rings for something a bit more unique! After years of waiting, they finally caved in to the wishes of their kids; Brad popped the question this spring, and they keep hinting that a wedding is happening very soon. Wedding details are leaking out slowly, and the newest is that the couple will be doing rings and tattoos! Brad already got rings, but the tattoo design is still in the air.

A source reports to Ok Magazine, print edition January 7, 2013, “They’re finalizing deisgns now, but all they’ll say is it will be very intimate. Angelina loves complicated and deeply thought out tattoos that only have meaning to her and those closest to her. Brad likes something more visual, and even suggested they do something a little silly, like a favorite cartoon character.” Cartoons? Considering Angelina’s current tattoos, which are all seriously obscure and unique, I can’t picture them getting Tweety Bird. But Angelina isn’t thrilled about his idea. “Angie wanted big, Brad wanted small—but they are both having to compromise.”

Angelina is no stranger to tattoos, and we expect she’ll be taking the lead on design and body part placement. Brad actually got a tattoo of one of Angelina’s doodles on his body. “I was drawing on his back. He just liked it! It just enhances the part of the body I like. It’s meaningful in that it’s us making angles and shapes out of each other’s body.”

While that makes the tattoos sound super sexy, we’re sure it will be classy. The wedding tattoo may be another Angelina design, but we may never see it! The tattoos are “very special to them” and may not be in a place we’ll ever get to see! Do you think wedding tattoos are a good idea?