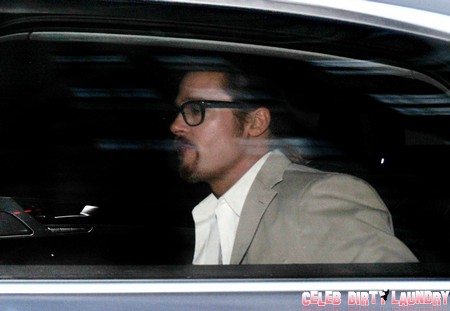 Brad Pitt is busy these days. In addition to promoting his new movie Killing Them Softly which is out next month Brad is endorsing Chanel and promoting the documentary The House I Live In.  The film produced by Brad, Danny Glover, John Legend and Russell Simmons tackles the subject of the war on drugs, its failures and offers a possible solution to the criminalization of drug users and pushers.

It’s no surprise that Brad would tackle this subject. With his own drug history Brad has a personal stake in this topic. Not only Brad but his fiancée, Angelina Jolie, have a past chequered with drug use.  But Brad’s documentary is not about getting people off drugs. His agenda is to decriminalize the use and sale of what are labeled illegal drugs. Brad wants to show the failure of the 40-year-old war on drugs and how it has affected America negatively.  Brad told The Huffington Post “The only way to end the war on drugs is to take the profit out of it. I know this comes with a whole other host of problems and I don’t know if I’m actually presenting it as a reality, but we have to look at the what-if-everything-was-legal and people were allowed to make their own choices.”

Director Eugene Jarecki added “If it was any other federal program, it would be looked at as a ridiculous federal waste. It’s only because it’s law-enforcement-tough-on-crime, it has that sort of veneer, that no one says this is a gigantic federal invasive program that is a huge waste of money.”

The criminalization of drugs and war on drugs in the USA are similar in effect now to prohibition in the 1920’s.  For those of you who might not be aware, prohibition was the Federal Government enacting the criminalization of the production, transportation and sale of alcohol.  Prohibition provided a hugely profitable revenue source for organized crime and yet did little or nothing to prevent the consumption of alcohol.  Prohibition is seen by economists, historians, and law enforcement as the act that permanently ensconced organized crime in America and allowed it to place its foot on society’s throat. The foot is still there today…

Now we see a similar farce playing out – one can get any drug one likes right on the street in any American city and more than ½ of the people in prison today are there on drug-related charges!  Perhaps even worse, the billions of un-taxed black-market dollars paid for illegal drugs find their way right into the pockets of organized crime!  The criminalization of drugs in America and the war on drugs are the greatest gift we could give to organized crime.  You know that these vile parasites, the organized criminals at the top of the pyramid of death and pain that is drug dealing and drug addiction, are the first to lobby against the de-criminalization of drugs.

We do NOT imply that any form of illegal drug use is safe or smart but we note that alcohol kills many more people and destroys more lives each year in America than do illegal drugs. Let us know your opinion on this sad issue below.