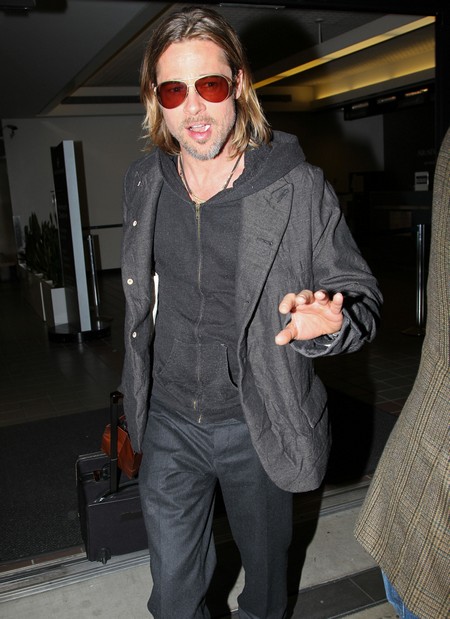 Brad Pitt provided his ex-wife, Jennifer Aniston, with special advance notice of his engagement to Angelina Jolie.  Brad is always a true gentleman, except of course when he slept with Angelina while still married to Jen.  Anyway, either Brad didn’t want Jen to hear about the engagement in the media or Angelina made him call…   But call he did and in early April Brad called Jen to announce that he has proposed to Angelina and that she had accepted.

Jennifer immediately went into full damage control mode and starting publicly boasting about her amazing love life and how Justin Theroux was the man of her dreams…  For example, in the latest issue of Australia’s ‘Mary Claire,’ Jennifer  went out of her way to announce to the world that she has found nothing but joy and happiness with Justin.  Jen said she adores Justin’s sense of humor adding: ‘he’s a protector, for sure. He’s just a good human being.’

Of course damage control for Jen was far from over – as soon as Brad and Angelina made their engagement official last Friday Jen’s massive PR team put out word about how ‘happy’ she was for the couple .  Yes – as soon as Brangelina’s engagement was official, amazingly, we read about how happy Jen was!

Happy my butt!  Jen might be happy if Angelina fell off the face of the Earth but don’t tell me she was pleased that the woman who stole her husband will now be marrying him.  Anyone who thinks Jen is happy for Brangelina is beyond gullible – they are just plain thick.

The National Enquirer Print Edition, April 30 has the details:  “Brad called Jen the first week of April to tip her off about the engagement,” revealed the source close to the 43-year-old “Friends” star.  Brad said, “I wanted you to hear it first for me. I asked Angelina to marry me and she said yes.”

‘The news hit her like a ton of bricks. Jen never actually believe that Brad would actually marry Angie.’

They were Hollywood’s ultimate golden couple until Brad, 48 and Angelina flipped for each other while filming the action thriller” Mr. and Mrs. Smith.” Jen filed for divorce in March 2005, and the split was finalized several months later. But a devastated Jen-who fell for Justin, 40, in 2011 after they filmed the quirky ‘Wanderlust’ quickly bounced back, said the source.

In a true master stroke, she made a glowing reference to Justin in a magazine interview that hit newsstands shortly before Brad’s engagement was announced.

“Jen obviously knew the engagement announcement was coming,” said another source “It was no coincidence that her own story was leaked right before hand”

So there you have it folks.  The inside scoop on Jen’s plotting and scheming to try to come out looking good after the Brangelina’s engagement announcement.  No matter what she does, Jennifer Aniston will never look good to me.  What do you think?  Do you buy Jen’s PR crap?  Let us know in the comments below.