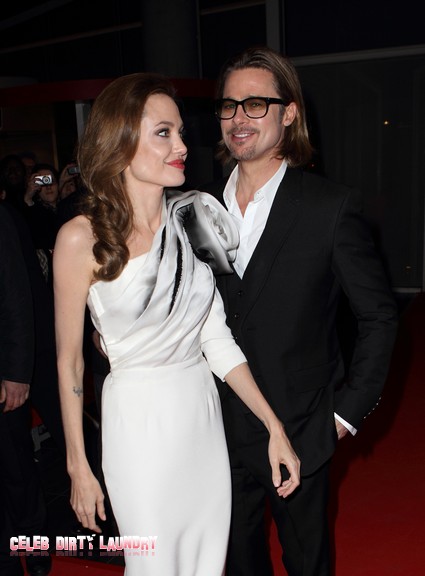 Yikes! Angelina Jolie must be freaking out since Brad Pitt’s cell phone is missing and it apparently contains hot sexy pics of her. An insider has reported to Star mag that Brad lost his personal cell phone – which is an iPhone – at the BAFTA’s just before Valentine’s Day. If the phone is found by the wrong person then we might soon be seeing more of Angelina than we ever expected – and more than SHE ever did either!

The Hollywood Rag reports:  Inside the March 2, 2012 Edition of Star magazine, an insider reveals that Brad lost his personal iPhone at a high profile celebrity event – the BAFTAs on February 12. And there are intimate photos of the couple on it!

The source scooped: “It’s a nightmare for Brad! Angelina is livid. She told him a hundred times to delete the
shots for this very reason. She warned him that something like this could happen.”  Oh well, let’s see if someone even finds it and realizes who they are to maybe leak it or just return it to the Pitts.

The issue of celebs having embarrasing photos leaked always makes for big news. These revealing pics almost always originate on the celeb’s cell phones or computers and wind up plastered across the internet. Most often hacking is the problem but a lost or stolen cell phone can be just as dangerous.

The most famous case of cell phone hacking occurred in September of last year when Scarlett Johansson’s nude photos spread across the Internet like wildfire. As we later learned a hacker got into her iPhone and leaked the photos. Celebrity websites, us included, picked up on the pictures and posted them, because it’s news, right?

Scarlett opened up to CNN in an interview about her privacy. She called the whole situation “unjust” and said that she her privacy was invaded.

Scarlett said at the time: “Just because you’re in the spotlight, or just because you’re an actor or making films or whatever, doesn’t mean that you’re not entitled to your own personal privacy. I think no matter what the context, if that is besieged in some way, it feels unjust. It feels wrong.”

Christopher Chaney, 35, of Jacksonville, Florida was eventually arrested for the crime and we learned that other celebs who were hacked include Mila Kunis, Jessica Alba, Vanessa Hudgens, Ali Larter and Christina Aguilera.

The issue of celebs not having compromising pics wind up on the net is a no-brainer. Since electronic devices can be stolen, lost, and hacked all that a celeb needs to do to remain ‘safe’ is to simply avoid taking such pics and putting them on these devices in the first place. Would you carry $1,000,000 in your purse or wallet?