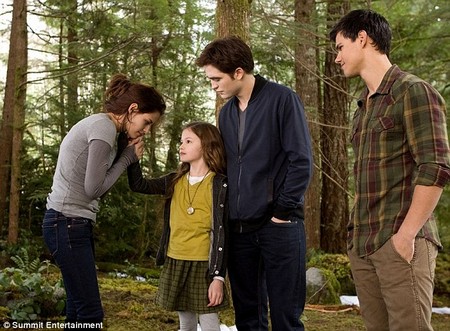 Sink Your Teeth Into This!  Twilight fans have been chomping on the bit with anticipation after finally getting the chance to see the trailer for the final installment, Breaking Dawn Part 2. A new still has surfaced and we are privy to a tender moment between newly turned vampire Bella and her hubby Edward Cullen, as they share a moment with their vampire-human daughter Renesmee. Oh yes, and Jacob is in the mix as well – obviously.

In the photo Kristen Stewart fondly touches her daughter’s hand as Renesmee, played by Mackenzie Foy, touches her mother’s cheek. How unbelievably sweet. Robert Pattinson looks gorgeous as ever as Edward – let’s be honest, he could be dragged through the mud and I’d still love him.

In another released still, we see Bella face-on as the beautiful vamp she becomes. I’ve been waiting for this moment for ages!! She is seen in a tent with her daughter gazing up at her. Very touching, in a cheesy Twiligh-esque way. We then see Renesmee with Jacob, who initially sets out to kill her before ‘imprinting’ on the child. If this sounds way out there, it’s because it is, but that’s why I love it!

In this last film we will see the Cullen’s fight against the ancient vampire clan, the Volturi, who wish to kill Renesmee believing that she was born human and was turned into a vampire by the Cullens.

Check out the rest of all these new stills – and if you’re a die-hard fan like myself, you’ll be dying with eagerness for the film’s November release.