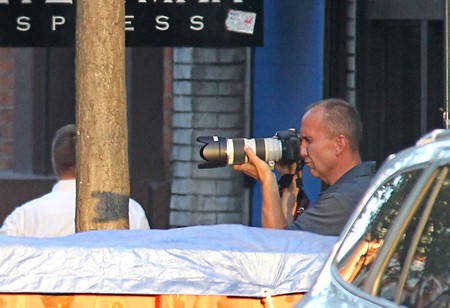 The Church of Scientology has denied that they are spying on Katie Holmes although we don’t have any good reason to believe them. A lawyer for the cult, Gary Soter, has responded to TMZ’s story about the surveillance on Katie.  Soter claims that ‘the Church of Scientology is not following Katie or conducting surveillance on her in the wake of her divorce with Tom Cruise.’  So we have to assume that all the pics we have seen of the active surveillance have nothing to do with Scientology… well no, we don’t believe it.

Tom Cruise is a high-ranking member of Scientology who had the leader, David Miscavige, serve as his best man at his wedding to Katie.  Of course Tom is capable of hiring his own spy team – he has enough money to finance a small army – but given his close alliance with Scientology we believe that his actions and those of his church are inseparable.

Scientology is infamous for relentlessly hounding members who try to escape the cult’s clutches.  Katie has crossed the line – this divorce will expose Scientology and Tom to extreme ridicule – the cult is very afraid and they will do whatever they can to contain this PR disaster.

TMZ has the exclusive: The Church of Scientology has responded to TMZ’s story … that Katie Holmes believes she is being followed by the Church — they say it ain’t so.

Gary Soter, lawyer for the Church, tells TMZ … the Church of Scientology is not following Katie or conducting surveillance on her in the wake of her divorce with Tom Cruise.

As we previously reported, several vehicles have been on Katie’s tail in recent weeks, but again the lawyer says the Church is not behind it.

The reports that a publication has placed a tail on Katie do not explain the surveillance she is under.  The surveillance predates Katie’s divorce filing and she is convinced that Tom and Scientology are behind it.  We believe her.  Do you?  Let us know in the comments below.