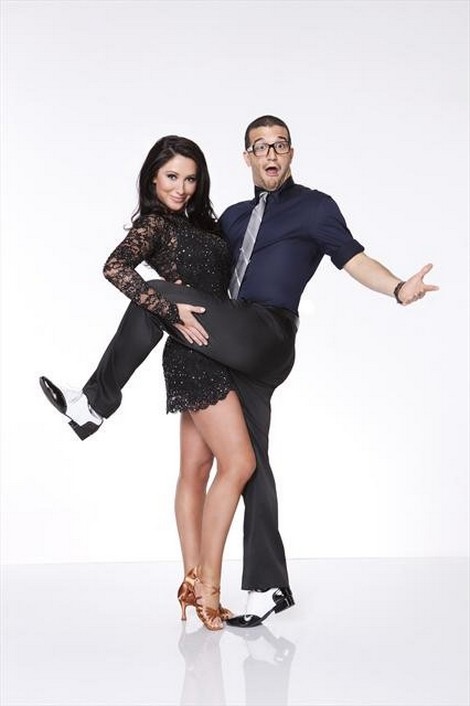 Bristol Palin danced the Cha-Cha-Cha for her first performance of Dancing With The Stars All-Stars 2012 Season 15.  All 13 couples will hit the stage performing either the Cha-Cha-Cha or the Foxtrot to impress the judges and viewers at home, hoping they’re not the first couple sent home.   We recapped the tonight’s show for you and if you want to see how all the couples did go HERE!

Bristol Palin and professional dancer Mark Ballas dancing the Cha-Cha-Cha.  Bristol had this to say about tonight’s performance. “Our first dance of the “DWTS: All-Stars” season will be the cha cha. I would rather start out with a more serious dance – I like the stern vibe of the Paso Doble and the Tango. Their beat seems like the songs are saying, “Get to the point!” Hopefully, if I survive the cha cha, I’ll get a chance to do those.”

Judges Comments:  Len: “Far more confident when you came out.  You have great legs, you arms have to be more fluid.  Overall a great improvement” Bruno: “Is it really you, you were killing it.  You have to keep the focus.  You have all the elements, you need power and focus.” Carrie Ann: “I am taken aback, I vote you the most improved.  Your legs were beautiful.  You have a lot more confidence.”

Dancing with The Stars All-Stars continues tomorrow night and will kick off with live interviews with Tom and the cast, offering an in-depth look at why each celeb has decided to return for another chance at winning the coveted mirror ball trophy.  Before the  night’s end, the season’s first couple will be eliminated from the show.

Watch the video below and let us know what you think? Do you think that Bristol did enough to win the Mirror Ball Trophy? Sound out in the comments below!