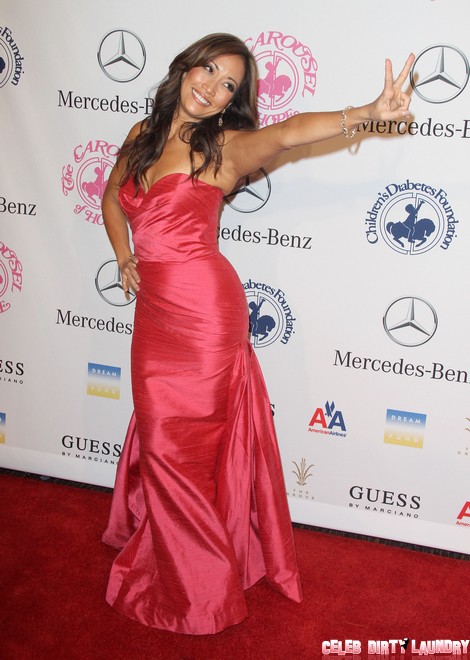 Carrie Ann Inaba, the soft-lipped judge of Dancing with the Stars, is in a bit of a tough spot with her co-judges Len Goodman and Bruno Tonioli. Their relationships went so awry that Inaba is refusing to speak to them. According to a Hollywood Hiccups report, Inaba is pissed off at them due to their sweet-natured critique and hippy-like attitude towards the contestants, while Inaba, on the other hand, has been much more acerbic than her co-panel. She looks like the fool with a Listerine addiction, unfortunately.

According to the National Enquirer, Print Edition December 3rd,  “Carrie Ann thinks they’ve been wimping out because Bruno is doing his usual cheerleadering and, if anything, Len is trying to soften his image.  She’s disgusted and has told them behind the scenes, leaving the three pointing fingers at one another and no longer speaking backstage.  The producers just hope they can make it to the end without one of them walking out – it’s gotten that bad!”

The green-eyed monster also dug its claws into Inaba’s back when Paula Abdul made her appearance on the campy Vicks-smile television show. A source adds, “She thinks Paula’s tremendous scene-stealer. Carrie Ann loves being the only female judge, and she’s suddenly looking at Paula as competition, even though Paula’s gig is temporary.” We reported here on Celeb Dirty Laundry last week that Inaba might be replaced by the former American Idol and X-Factor judge when the 16th season of the show airs. The threatening presence of Abdul is sending Inaba into a flat-spin, as the permanent Inaba fears that Abdul will remove her from the panel she’s been seated at since 2005. Whenever Abdul appeared on the show this season, Inaba became much more forced towards the contestants, which clearly indicated that she was intimidated by the masterful Abdul.

The labor inducing 15th season of DWTS is reaching its climax this week, with or without this troupe of merry fools. The proverbial ball is in Inaba’s court, but only time will tell whether this faux-judge will remain seated at one of the most sought after panels in the entire dancing universe.

Do you want to see Abdul as a future judge? Do you think Inaba has long overstayed her welcome? Let us know your thoughts in the comments below.